Will resign if demand for separate statehood not met: Tripura Minister

He also accused the previous Congress government of depriving the indigenous people. 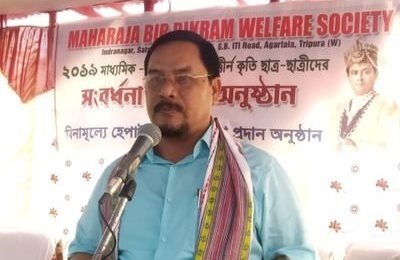 New Delhi: Tripura Welfare Minister Mevar Kumar Jamatia on Tuesday threatened to tender his resignation if demand for a separate ‘Tipraland’ state for the indigenous people was not met by the ruling BJP government.

“I am ready to resign if the government is not happy with me. I am fighting for the cause of our Tripuri people. Our demand is the creation of the statehood under Article 2 and 3 of the Indian constitution,” Jamatia, whose party Indigenous Peoples Front of Tripura (IPFT) is an alliance of the BJP-led Biplab Kumar Deb government in Tripura, said while talking to reporters at Jantar Mantar here, where the IPFT and Tipraha Indigenous Progressive Regional Alliance (TIPRA) party led by Pradyot Manikya Debbarma, staged a protest demanding separate statehood.

Attacking the ruling BJP, the Minister said, “IPFT had an agreement prior to the election (2018 Assembly), but still our demand is not fulfilled. We are still fighting. We had raised this issue with the Centre several times. I appeal, the Narendra Modi-led government at the Centre to look into the matter. I believe what my people want, they will accept it.”

He also accused the previous Congress government of depriving the indigenous people.