Will not recognise any govt imposed through military force in Afghanistan, says Doha meeting

They called for “a stop to violence and attacks immediately in and against provincial capitals and other cities”. 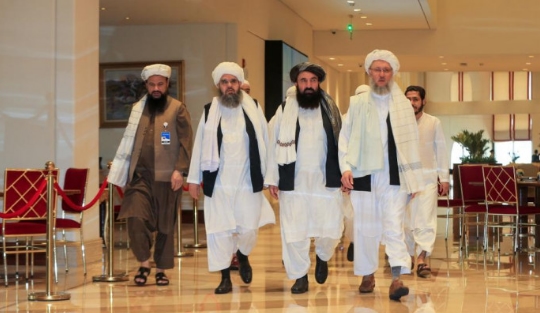 Doha/Kabul: Countries participating in the Doha meeting have called for an immediate halt to violence and attacks on cities across Afghanistan and stressed they will not recognize any government-imposed through the use of military force, even as the Taliban captured 15 provincial capitals and are marching towards Kabul.

In a statement issued on Thursday, at the end of the meeting of special envoys and representatives from several countries, including China, the US, Pakistan, the UK, UN and India, the participants agreed that “the peace process needs to be accelerated as a matter of great urgency on the basis of the negotiations of concrete proposals from both sides”.

They called for “a stop to violence and attacks immediately in and against provincial capitals and other cities”.

They “reaffirmed that they will not recognize any government in Afghanistan that is imposed through the use of military force”.

They voiced grave concerns about reports from across Afghanistan on the “continued violence, large numbers of civilian casualties and extra-judicial killings, widespread and credible allegations of human rights violations, all attacks (ground and air) against provincial capitals and cities, and the destruction of physical infrastructure that perpetuate conflict and make reconciliation efforts more difficult,” the statement said.

“Participants urged both sides to take steps to build trust and accelerate efforts to reach a political settlement and comprehensive ceasefire as quickly as possible.”

They “took note of converging statements of both sides” – of the Afghan government and the Taliban — on the guiding principles for a political settlement, that included inclusive governance, respect for human rights, including the rights of women and minorities; a mechanism to deliver a representative government; a commitment not to allow any individuals or groups to use the soil of Afghanistan to threaten the security of other countries; and, respect for international law, including international humanitarian law.

They called on all Afghan sides to act in accordance with these principles and build on them in the future political settlement.

They also committed to assist in the reconstruction of Afghanistan once a viable political settlement is reached following good faith negotiations between the two sides.

The statement comes as the Taliban have taken control of 15 of Afghanistan’s 34 provincial capitals, reports said on Friday.

The Taliban have overrun Pul-e-Alam, capital of the eastern Logar province, which lies less than 90 km from Kabul, the group’s spokesperson Zabihullah Mujahid claimed in a series of tweets on Friday.