Followed by ablution, the deities are carried back to the temple, smeared with vermillion and the Puja commences. 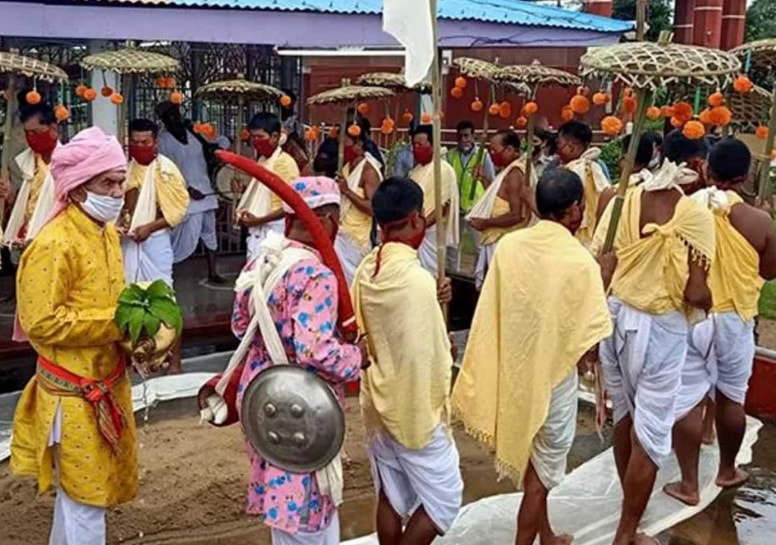 Agartala: A week-long traditional Kharchi festival – offering prayer to 14 Gods and Goddesses with religious fervor began on Thursday in presence of thousands of devotees from across the country at Khayerpur, the eastern outskirt of the city.

Speaker of Tripura Legislative Assembly Ratan Chakraborty led the bathing procession of the deities early in the morning at River Haora when the festival started.

Followed by ablution, the deities are carried back to the temple, smeared with vermillion and the Puja commences.

A pall of gloom descended over the electrocution of youth and left another injured during the preparation of Kharchi puja on Wednesday.

Both of them were local electricians working on the decoration of the festival.

The administration made elaborate security arrangements to ensure a peaceful celebration of Kharchi while additional arrangements of transportation and other facilities were made for the devotees round the clock.

Kharchi Puja is predominantly a tribal festival but it owes its origins to the Hindu religion. Devotees and saints from across India and neighboring Bangladesh have also participated in the festival.

According to Tripura royal family’s chronicle ‘Rajmala’, Queen Hiravati once went to take a bath in the river Maharani and noticed a wild buffalo chasing the 14 gods.

With the help of the queen’s cloth, the gods managed to kill the beast. Happy with Hirabati’s help, the gods visited the palace and the royal family offered puja by sacrificing wild buffaloes.