During the call on, both dignitaries exchanged warm greetings on the milestone occasion of 50 Years of Diplomatic Ties between Bangladesh and Thailand, which is being celebrated on both sides with fervor and enthusiasm. According to MoFa Press Release. 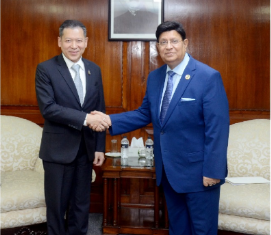 During the call on, both dignitaries exchanged warm greetings on the milestone occasion of 50 Years of Diplomatic Ties between Bangladesh and Thailand, which is being celebrated on both sides with fervor and enthusiasm. According to MoFa Press Release.

In his remarks, Dr. Momen shared that Bangladesh is firmly committed to maintaining cordial and friendly relations with all the neighboring countries in the spirit of its cardinal foreign policy objective of ‘friendship to all, malice towards none.’ He stressed the importance of forging a stronger and more effective regional collaboration by facilitating greater connectivity in the region. In this connection, he conveyed Bangladesh’s keenness for joining the proposed India- Myanmar-Thailand highway for further accelerating regional trade, investment, and people-to-people contacts.

Foreign Minister called for mutually beneficial initiatives and cooperation in order to harness the complementarities existing between the two economies. He requested more Thai support and expertise for improving the tourism sector of Bangladesh. He also encouraged more Thai investment in the infrastructure development initiatives of Bangladesh, the agro-processing sector, the health and pharmaceutical sector, etc. to further deepen the bilateral economic relations.

Foreign Minister sought a more proactive role of Thailand in particular, and of the ASEAN in general, for ensuring expeditious and sustainable repatriation of the displaced Rohingya people sheltered in Bangladesh on humanitarian grounds, to their homeland in Myanmar.

The Thai permanent Secretary-designate lauded the high growth and massive developmental efforts going on in Bangladesh currently, which is rapidly transforming the country. He suggested examining the possibilities of an FTA between the two countries for further strengthening the bilateral economic relations.

Earlier, during his courtesy call on Ambassador Masud Bin Momen, Foreign Secretary (Senior Secretary), the visiting Thai Permanent Secretary-designate H.E. Mr. Sarun Charoensuwan highly praised the interfaith harmony in Bangladesh that he observed during his offering of the Royal Kathina Robe at a temple in Binajuri in Chattogram yesterday.

Welcoming the Thai Permanent Secretary-designate to Bangladesh on his maiden visit, Foreign Secretary stressed the importance of strengthening a stronger regional approach to cope with the emerging challenges, particularly the ones caused by the pandemic and the conflicts in Europe. He also urged to add further momentum to the bilateral relations by raising it to a strategic level. He suggested keeping all the bilateral mechanisms fully functional in order to maintain the desired level of vitality and mobility in the relations.

Later on, Foreign Secretary and the visiting Thai permanent Secretary-designate jointly unveiled a commemorative stamp designed by Bangladesh Post and launched an e-Book sponsored by the Royal Thai Embassy in Dhaka on the occasion of the 50 Years of Diplomatic Ties between Bangladesh and Thailand at a simple ceremony at the Ministry of Foreign Affairs today.