Maipk was awarded for the Best Cinematography in the 13th Manipur State Film Festival 2020 in the Feature-film category for the film ‘Nongphadok Lakpa Atithi’. 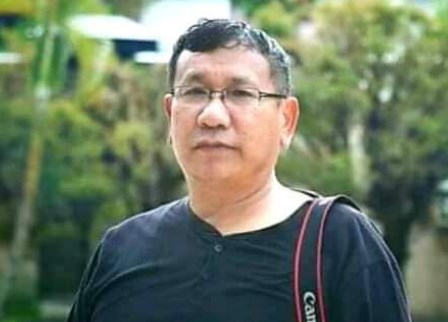 The reports said that Maipak was admitted at Raj Medicity and had been undergoing treatment for nearly three weeks.  He was already improved but later shifted to ICU after his health became deteriorated. He breathed his last on Wednesday night at the same hospital.

Born to late Irom Sanajaoba and late Irom (O) Thambalngoubi at Sagolband Salam Leikai, Maipak won as many as five awards including national in the field of cinematography and had also involved in dozens of other films.

The film Nupishabi (Women Impersonator) produced by Films Division, Mumbai 2010 was presented in the FILM APPRECIATION course at N.F.A.I. Pune 2011.

The film Loktak – the dying lake of Manipur directed by Aribam Syam Sharma was screened at the Water festival at Banglore, 2007.

The film Threads of Life directed by B. M. Sunzu Sharma participated at the 7th Mumbai International Film Festival 2002.

The film Kangla directed by Haobam Paban Kumar won the award for the Best Programme in Social Sciences at the 14th UGC-CEC Educational Awards, 2001.

Meghachandra Kongbam, Swarna Kamal Awardee film critic, said Irom Maipak was a gem of Manipur cinematography. He was the only National Award winner in cinematography from Manipur so far for his fascinating style of framing under an uncontrolled situation in Aribam Syam Sharma’s documentary – ‘The Monpas of Arunachal Pradesh’ in the year 2001.

He also bagged the best cinematographer award in the 8th edition of International Documentary and Short Film Festival of Kerala 2015 in Haoban Paban Kumar’s international acclaimed documentary – Phum Shang. The sudden demise of Irom Maipak who carve a niche in Indian cinema is an irreparable loss for Manipuri cinema, Kongbam added.

Expressing dismay at the sudden demise of Maipak, international award-winning filmmaker Amar Maibam said the Manipur film industry has lost a bright star who had so much potential. He was one of the most senior and best cinematographers who worked with many veteran filmmakers including Aribam Shyam Sharm.