Earlier, Mithun had hosted RSS chief Mohan Bhagwat at his Mumbai home recently. Later, he said he had a “spiritual relationship” with the RSS supremo. 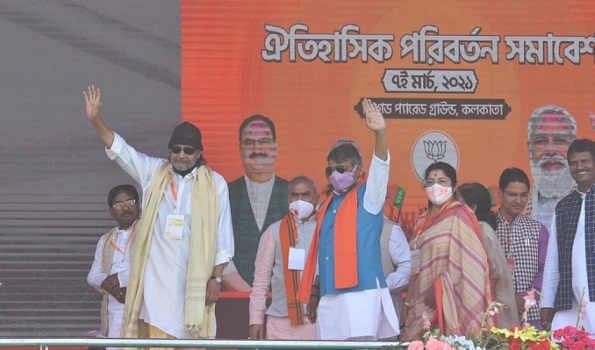 Mithun met BJP’s Kailash Vijayvargiya last night, with the leader tweeting that he was “floored” by the actor’s patriotism and love for the poor and downtrodden

Earlier, Mithun had hosted RSS chief Mohan Bhagwat at his Mumbai home recently. Later, he said he had a “spiritual relationship” with the RSS supremo.

Earlier, Vijayvargiya said the actor was not interested in vote politics.

Vijayvargiya said normally during Modi’s rally no one is inducted into the party.

Today’s rally will be Modi’s first rally in the state since the election commission announced the dates for the assembly election. However, PM Modi has visited the state multiple times in the past few months. The rally is scheduled to begin at 2 pm.

Modi is scheduled to hold more than 20 rallies in the state over the course of the election, with the last phase on April 29.

Banners, posters and cutouts of the PM have been put up across the city to welcome him, with the party organising flash mobs over the past few weeks in the run-up to the rally. Several top BJP leaders are expected to be present at the meeting.