The bulk of some 3,000 US troops will arrive in Kabul by the end of the weekend to support the withdrawal of civilians amid a sense of urgency prompted by the pace of the Taliban advances. 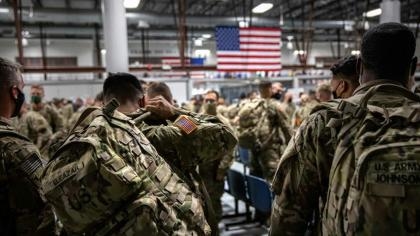 Washington: The United States along with several other countries began fast-tracking evacuations of civilians from Afghanistan amid rapid gains by the Taliban (banned in Russia), while the UN urged the insurgents to halt their offensive with the country descending into chaos.

At the end of day Friday, the White House said President Joe Biden spoke to his cabinet about the ongoing efforts to safely reduce the civilian footprint in Afghanistan just hours after the Pentagon announced concerns over the recent rapid advance of the Taliban, which now controls around half of the 34 provincial capitals and roughly two-thirds of the war-torn South Asian country.

The change in tempo comes after Biden and other administration officials this week repeatedly said the fall of Kabul was not inevitable, despite reports US intelligence predicted the Taliban would take over in 90 days.

The bulk of some 3,000 US troops will arrive in Kabul by the end of the weekend to support the withdrawal of civilians amid a sense of urgency prompted by the pace of the Taliban advances.

“We are certainly concerned by the speed with which the Taliban has been moving,” Pentagon spokesperson John Kirby told reporters on Friday. “They [the Taliban] are trying to isolate Kabul.”

Kirby said the operation is a “narrowly focused, tailored mission” to help with the secure reduction of civilian personnel in Kabul, as well as to support the acceleration of special visa processing. He said the US intends to evacuate thousands of civilians out of Afghanistan each day.

The Pentagon spokesperson sent a message to the Taliban during the briefing, warning that if US forces are attacked or threatened, they will respond in a “forceful and appropriate way,” out of self-defence.

Meanwhile, Politico reported that US personnel are planning a complete evacuation of the embassy in Kabul and are already destroying sensitive materials and burning flags.

To make matters worse, reports surfaced that the Taliban have gotten their hands on advanced aircraft, which the US helped the Afghan Air Force acquire. The Department of Defense’s Office of Inspector General published a report on Friday that revealed “hundreds of millions of dollars” worth of US equipment had been lost due to poor recordkeeping.

Former officials and experts are predicting that the Taliban could seize power within days, not months.

“The situation is not redeemable,” former CIA officer Phil Giraldi told Sputnik. “I fully expect that the government defences will completely collapse shortly and Kabul will fall in a matter of days. All the momentum is going against them and the will to resist appears to be minimal.”

Giraldi also cautioned that Biden’s mishandling of the transition could be used by Republican foes to hurt Democrats in next year’s midterm congressional elections.

US Army Colonel Douglas Macgregor, who served as an adviser to the Trump administration’s Acting Pentagon chief, also said the US would not send any additional troops.

“We are definitely departing. The troops will afford protection on the way out,” Macgregor told Sputnik. “The focus on Afghanistan will involve persistent ISR, but no troops on the ground.”

In addition to the United States, the UK, Canada, Switzerland, Norway, France, Spain, Belgium, Germany and the Czech Republic – among other states – took steps to protect their citizens, including extracting personnel, cutting staff, closing posts, and calling on them to leave the country.

The UK military began deployment in Afghanistan to support the evacuation of the country’s nationals on Friday, the defense ministry said.

Canadian Defense Minister Harjit Sajjan confirmed reports that special operations troops had been deployed to Afghanistan to secure remaining staff. Canada also announced that it will resettle up to 20,000 vulnerable Afghan nationals including female activists and journalists.

Meanwhile, UN Secretary-General Antonio Guterres warned that the situation in Afghanistan was descending into chaos and urged the Taliban to halt its offensive and begin negotiating.

“Afghanistan is in the throes of yet another chaotic and desperate chapter – an incredible tragedy for its long-suffering people,” Guterres said in a statement. “Afghanistan is spinning out of control.”

He also called on the world to send a clear message to the insurgents.

“The message from the international community to those on the warpath must be clear: seizing power through military force is a losing proposition,” Guterres said.

In addition, the UN chief said he was “deeply disturbed” by early indications that the Taliban are imposing severe restrictions on human rights in the areas under their control, particularly targeting women and journalists.

The United Nations, however, is not evacuating personnel at the moment, but the situation is being evaluated on an hourly basis, UN spokesperson Stephane Dujarric said in a press briefing on Friday.

NATO Secretary General Jens Stoltenberg, earlier, warned the Taliban movement it will not be recognized internationally if it takes over Afghanistan by force.