The ISIS-K group had owned the responsibility of the attack outside Kabul airport on Thursday that left over 120 people dead, including 13 US servicemen. 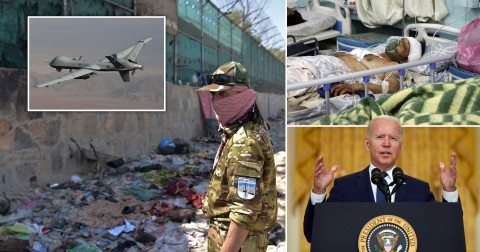 Kabul: The United States on Saturday is said to have conducted an airstrike against the Islamic State-Khorasan (ISIS-K) in the Nangarhar Province of Afghanistan that likely killed an extremist leader described as a ‘planner’ for the terror outfit.

“US military forces conducted an over-the-horizon counterterrorism today against an ISIS-K planner. The unmanned airstrike occurred in the Nangarhar Province of Afghanistan. Initial indications are that we killed the target,” US Central Command Spokesman Capt Bill Urban said in a statement.

He added that the US army was unaware of any civilian casualties caused by the airstrike.

The ISIS-K group had owned the responsibility of the attack outside Kabul airport on Thursday that left over 120 people dead, including 13 US servicemen. According to reports, over 1,300 people have sustained injuries in the twin suicide bombings.

The White House had on Friday said US President Joe Biden has given military commanders all necessary approvals to target the ISIS-K in Afghanistan.

Earlier, President Biden had vowed to hunt down the terrorists that were responsible for the heinous terrorist attack at the Hamid Karzai International Airport here. “We will not forgive. We will not forget. We will hunt you down and make you pay,” the President said in remarks from the White House on Thursday.

As per latest reports, the evacuation process is still going on from the HKIA airport. Since August 14, the US has evacuated and facilitated the evacuation of approximately 1,09,200 people.

Kohima: Union Minister for Agriculture and Farmers’ Welfare Narendra Singh Tomar has said that Nagaland is rich in the...
Assam