One Nagesh Kumar Srivastava, elder brother of Lokesh Srivastava, who installed the idol in the temple, has been taken into custody. 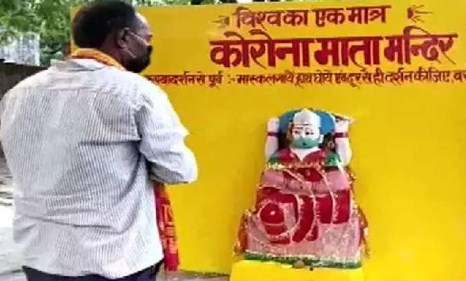 Sangipur police reached in the village late in the night and after demolishing the ”Corona Mai temple”, took away the remains of the broken idol in a tractor trolley, police sources here on Saturday said.

One Nagesh Kumar Srivastava, elder brother of Lokesh Srivastava, who installed the idol in the temple, has been taken into custody.

Now, the family members are accusing the police of bullying the family.

When this temple of Pratapgarh went viral on internet, crowd started increasing.

On June 7, Deepmala Srivastava of the village had established the temple under a neem tree. Four days ago some people had built a temple of ”Corona Mata” in Juhi Shukulpur of Sangipur police station area where people started worshiping while promoting superstition.

The image of Corona Devi was realised in the form of a statue in the temple. After this, the worship started here.

According to the villagers, three people had died due to corona virus infection here in the village and many people became positive. After the treatment, all of them were fine.

In such a situation, the villagers resorted to worship Corona Mata. People installed the idol of Corona Mata under a neem tree in the village and started performing ‘aarti’ (worship) in the morning and evening.

Media too published the news after which the authorities took action and stopped the superstitious practice.