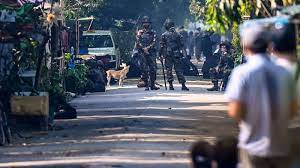 United Nations: The UN Security Council expressed deep concern about the deteriorating situation in Myanmar and called on the country’s military to exercise maximum restraint and pursue dialogue, , Vietnamese Ambassador to the United Nations Dang Dinh Quy said in a statement.

“The Members of the Security Council expressed deep concern at the rapidly deteriorating situation, and strongly condemned the use of violence against peaceful protestors and the deaths of hundreds of civilians, including women and children,” Quy, who presides with the Security Council in April, said on Thursday.

“The Members of the Security Council reiterated their call on the military to exercise utmost restraint. They reiterated the need to fully respect human rights and to pursue dialogue and reconciliation in accordance with the will and interests of the people of Myanmar. They called on all sides to refrain from violence,” he said.