Speaking at the inaugural programme Sonowal expressed happiness to be in the midst of the Naga brothers and sisters. The minister said he feels at home whenever he visits the state of Nagaland, and described Nagas as courageous, determined, and hard-working people. 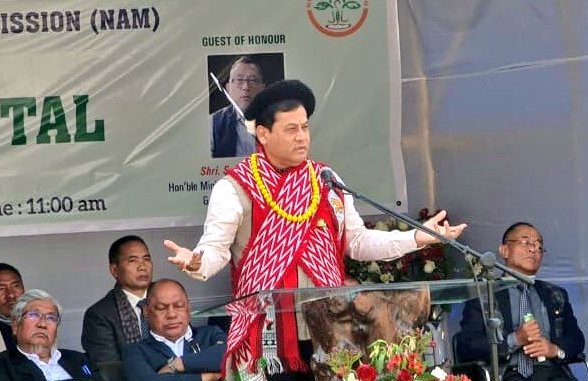 Speaking at the inaugural programme Sonowal expressed happiness to be in the midst of the Naga brothers and sisters. The minister said he feels at home whenever he visits the state of Nagaland, and described Nagas as courageous, determined, and hard-working people.

He praised the greenery and the state’s abundant natural resources and urged to explore and tap those resources scientifically. Sonowal also emphasized the importance of Ayush and its further development in the state since the state as a whole along with the NE states is considered a hotspot bio-diversity.

Wherein, wild plants having medicinal values could be extracted for use in the preparation of medicines, thereby possibly curing and preventing different diseases. On the occasion, he also mentioned that the centre has been emphasizing the growth and promotion of Ayush, as it gives not only strong immunity to our body but also helps us to perform better in the workplaces.

The growth and promotion of Ayush would create revenue as well as employment generation for the educated unemployed youths in the state.

The Union Minister mentioned that the state has a huge role to play in this sector, since the entire NE states have been endowed with abundant natural resources, besides being declared as one of the world’s hot spot biodiversity in the world.

Sonowal also assured one Ayush Medical College to the State soon. He also asserted that the Prime Minister Narendra Modi is always concerned about the speedy growth and development of the region and puts his whole faith and confidence in the people of the NE states.

Nagaland Minister for Health & Family Welfare S. Pangnyu Phom in his speech thanked the Union Minister for his visit to the state. He asked the neighbouring villages to check and control land-related issues. Phom also urged to explore all the natural resources, as the state is rich in flora and fauna which could be used as medicinal plants for different ailments.

He thanked the department for constant monitoring and supervising the work in spite of facing challenges.