MoS Dr Rajkumar Ranjan also led the cleaning of the INA replica and its surroundings. BSF troops gave a Guard of Honour with Rashtriya Salute on the occasion. 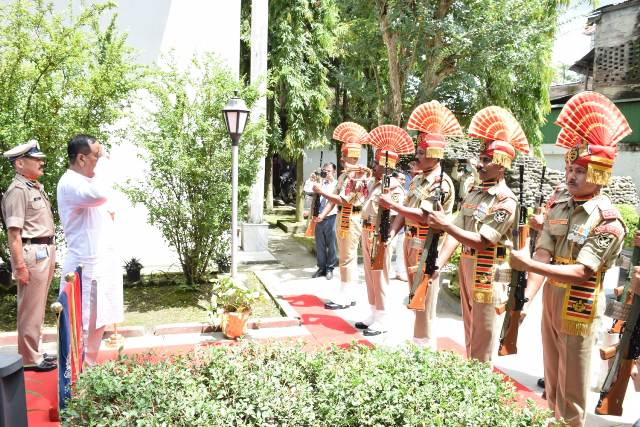 The event was organised by the District Administration of Bishnupur Sunday as a part of the celebration of 75 years of Independence and the Har Ghar Tiranga campaign under the Azadi Ka Amrit Mahotsav.

MoS Dr Rajkumar Ranjan also led the cleaning of the INA replica and its surroundings. BSF troops gave a Guard of Honour with Rashtriya Salute on the occasion. Family members of martyrs were also felicitated during the function.

Addressing the gathering, MoS Dr Rajkumar Ranjan Singh stated that there cannot be a better place other than Moirang to hoist the tricolor in celebration of India’s Independence. People of Manipur can take pride in Moirang as it best symbolizes our freedom struggle which will be etched forever in the annals of India’s freedom struggle.

He also said that India has made significant advancements in the sphere of technology and the agricultural sector after independence. India is able to produce two COVID vaccines apart from ensuring booster doses for its citizens when more advanced countries struggled to add succour to the global pandemic. Besides, it is able to share vaccines with the world under the country’s guiding principle of “The whole world is our family” through the vision and philosophy of Prime Minister Narendra Modi, the MoS added.

MoS Ranjan Singh continued that the price of freedom that our heroic forefathers paid is high, as it comes with blood, sweat and tears, he encouraged the younger generation to enjoy the fruits of freedom in igniting their dreams for an inclusive and prosperous Manipur and India.

He urged the younger generation to transcend the spiritual freedom, freedom of development and freedom of politics in the true spirit of patriotism adding that they are the Future of India.

Meanwhile, the Motor Bike Rally organized by the Home Department which was flagged-off by Chief Minister N. Biren Singh earlier in the morning from Hapta Kangjeibung passed through the streets of Moirang in the afternoon. Minister T. Biswajit Singh led the participants of the rally in paying floral tributes at INA memorial. Reception of the participants was also held at Sendra.