Indo-Pacific synergies through the lens of Culture,” in Kolkata, India, on Monday and Tuesday. 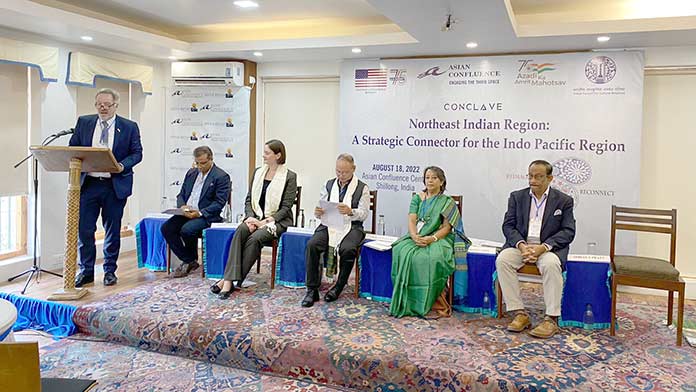 Indo-Pacific synergies through the lens of Culture,” in Kolkata, India, on Monday and Tuesday.

The conclave aims to leverage culture as a tool to trigger policy discussions and people-to-people connectivity, to ultimately help promote a free, open, prosperous, and inclusive Indo-Pacific region.

It focuses on three key themes: Trade & Connectivity, Ecology and Migration & Peacebuilding, according to a media statement.

It aims to juxtapose cultural presentations and policy conversations to create an interface between art, culture, and policy to look, feel and touch beyond the usual spaces in which policymakers usually operate.

Pavek said, “The United States is a proud Indo-Pacific nation. We have maintained and continue to strengthen our long-term commitment to an Indo-Pacific region that is free, open, interconnected, prosperous, resilient, and secure. Our commitment is to every corner of the region, from Northeast Asia and Southeast Asia to South Asia, Oceania and the Pacific Islands. The Indo-Pacific of today enjoys unprecedented economic ties and represents the world’s biggest producers of goods and largest trade markets.”

“This conclave embodies the Third-Space concept of Asian Confluence – a space autonomous of government and business but working in consort with them to shape narratives that define our region at the very core” said Dutta of Asian Confluence. The inaugural address was delivered by ambassador Harsh V. Shringla, Chief Coordinator for India’s G20 Presidency and former Foreign Secretary, Government of India, and former Ambassador of India to the U.S., who stressed the “critical importance of engaging with the region to be able to make sure that the Indo-Pacific region maintains a rule-based exchange, trade, and connect.”

The conclave then witnessed a spirited performance by Pt. Tanmoy Bose and team, on the ‘Sounds

& Rhythms of Indo-Pacific.’ This was followed by a conversation on the ‘Cultural Threads of Indo-Pacific’ moderated by Ambassador Rajiv Bhatia, Member, Governing Council, Asian Confluence.

During the discussion, Daniel Sim, Deputy Head of Mission, Australian Consulate General Kolkata, highlighted how “half of all Australians have overseas roots” and how that influences the Australian foreign policy in so far that it is very much oriented towards “expanding pre-existing prosperous ties” with the people in the Indo-Pacific region.

Nakagawa Koichi, Consul General, Consulate General of Japan in Kolkata, stressed the “importance of language as they key enabler for people-to-people connect in the Indo-Pacific region,” because people, he said, are the most important link to connect the Indo-Pacific, in terms of economy, ecology and security aspects.

Minakshi Mishra, Regional Director, ICCR, Kolkata, said that “culture connects, much like how the oceans and waters connect the land and continents, and hence is extremely key, in envisioning a connected Indo-Pacific.” She added how ICCR has continued to forge cultural ties through artistic and cultural exchanges over the years and will continue to do so in the days ahead.

Over the course of these two days, the conclave will see participation from a galaxy of more than 40 speakers and over 75 artists, performers and musicians from across more than 10 countries of the Indo-Pacific, including the United States, Indonesia, Malaysia, Sri Lanka, Thailand, Myanmar, Philippines, Vietnam, Bangladesh, Bhutan, Nepal, and India. This includes ambassador Riva Ganguly, former Secretary (East), Ministry of External Affairs, Government of India, Shahidul Haque, former Foreign Secretary, Government of Bangladesh, ambassador Sumith Nakandala, former Secretary General, BIMSTEC Secretariat, among others.

The conclave is expected to come up with ideas and recommendations that can interweave culture, policies and fresh thinking on the emerging narrative of the Indo-Pacific region.