Two rulers BJP and Motha demonstrate on each other in Tripura 

The BJP Janajati Morcha General Secretary Devid Debbarma on Wednesday alleged that the TIPRA Motha-ruled ADC was not functioning properly and they are violating the constitutional norms. He sought the intervention of the Governor to bring the administration of ADC in order. 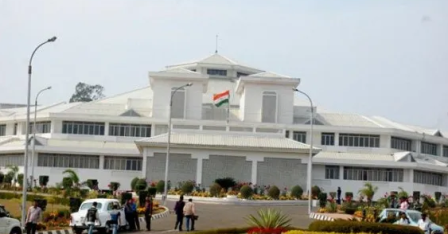 While BJP Jantjati Morcha held a demonstration protesting the alleged corruption in Motha-ruled ADC over the year in 44 locations, TIPRA Motha agitated at blocks protesting the decision of State Election Commission (SEC) for deferring ADC’s Village Committee (VC) polls despite the direction from the High Court of Tripura.

The BJP Janajati Morcha General Secretary Devid Debbarma on Wednesday alleged that the TIPRA Motha-ruled ADC was not functioning properly and they are violating the constitutional norms. He sought the intervention of the Governor to bring the administration of ADC in order.

Referring to a letter from the Comptroller and Auditor General of India Debbarma said, CAG in a letter to the Governor of Tripura Satyadeo Narayan Arya in June this year made it clear that the fund given to various schemes to them is not being spent properly urging him to take appropriate action.

The matter was brought to the notice of the Chief Executive Officer of ADC but, no action has yet, instead in the process of recruitment for filling up the vacancies at various levels, there have been massive irregularities by the elected representatives depriving the eligible candidates, he alleged further.

Meanwhile, BJP tribal leader and Loksabha MP Rebati Tripura alleged that TIPRA Motha has no respect for the Constitution and any commitment to the people who voted them to power. There has been a competition for corruption among the Motha leaders forgetting the promises they made before the elections that have strained the situation of hills.

Under these circumstances, BJP Janajati Morcha sent a common memorandum to the Governor from each of the sub-zonal offices highlighting all these issues and seeking his intervention for the indigenous people of the state.

On the other, TIPRA Motha held a protest demanding the government comply with the direction of the High Court to hold (a VC) election in November. The SEC was supposed to publish the final list of electorates on Oct 15 last to hold the election of 587 VCs.