Details of the discovery have been published in the Nature Portfolio. Nature Portfolio serves the research community by publishing its most significant discoveries and findings. 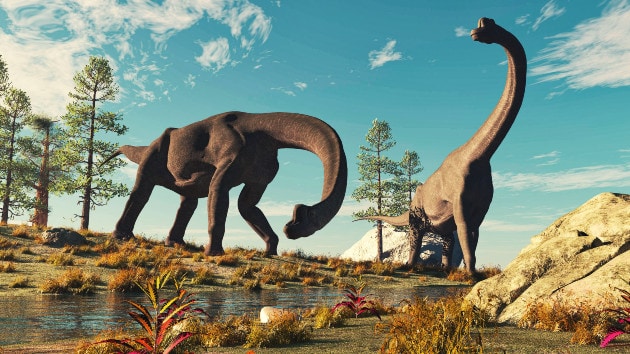 Bengaluru: Scientists have unearthed two new species of dinosaurs in a region where dinosaur fossils had never been discovered.
About 130 to 120 million years old fossils from three different dinosaurs dating to the Early Cretaceous period have been unearthed in the Turpan-Hami basin in northwest China.

Details of the discovery have been published in the Nature Portfolio.
Nature Portfolio serves the research community by publishing its most significant discoveries and findings. The online journal is open for scientists to not only publish primary research but also reviews, critical comments, news and analysis.

During the last decade, several more fossils have been collected in this area, including three somphospondylan sauropod specimens, scientists say.

The first fossil is Silutitan sinensis, which consists of an articulated middle to posterior cervical vertebrae series.

The second fossil, Hamititan xinjiangensis, consists of an incomplete articulated caudal sequence that could be assigned to lithostrotion titanosaurs based on the strongly procoelous caudal vertebrae with lateral concave surface, as well as marked ventrolateral ridges.
And the third fossil consists of four sacral vertebral elements, apparently unfused, with exposed camellate internal bone and regarded as somphospondylan, scientists say.

According to Cladistic analysis, Silutitan sinensis is as an euhelopodid closely related to Euhelopus and Hamititan xinjiangensis as a titanosaur.
Besides the pterosaur Hamipterus and one theropod tooth, these dinosaurs are the first vertebrates reported in this region, increasing the diversity of the fauna and the information on Chinese sauropods, scientists say.

“This supports a widespread diversification of somphospondylans during the Early Cretaceous of Asia,” they add.