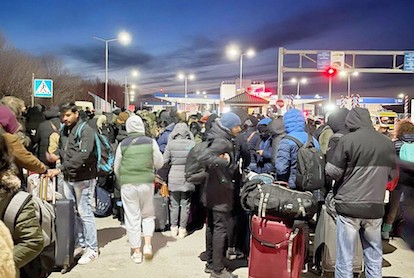 Kohima: Two medical students from Nagaland are stranded in war-torn Ukraine, but reportedly out of the war zone According to latest official update one youth Yirackchang from Poilwa village under Peren district is studying medical course at I.

Sources said Machu Yirackchang still stranded in the war-torn country in Uzhhorod city along the Hungarian border had left his studying place Ternipol city on Friday last along with other Indian students and were headed towards Poland in the hope to travel to India via Hungary, are currently taking shelter at a hostel there.

They would be taken to Hungary and would be evacuated via Budapest airport to India. While Amen Aier, along with 62 other Indian students has safely crossed over to Moldova on a bus on February 27.

The students’ body of Nagaland the Naga Students’ Federation has informed all Naga individuals, students, parents and relatives stranded in Ukraine or currently taking shelter in neighbouring countries to provide details of such persons to its grievances cell at +917005305832 or +918974508102 and email: nagastudents1947@gmail.com a release said.