He said the General Manager-HRD issued instructions to violate the I D Act and not to hold back any transfer order. 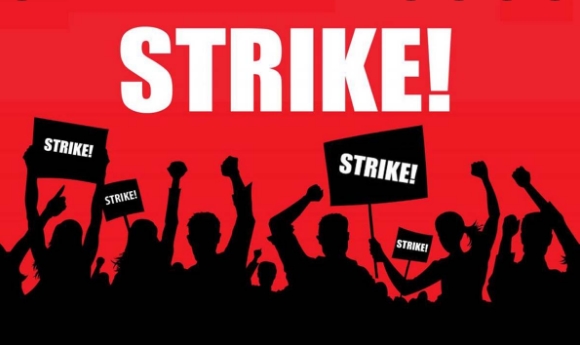 Hyderabad: At the call of the United Forum of Central Bank Unions (UFCBU), consisting of five unions in the Central Bank of India and affiliated to AIBEA, INBEF, BEFI, NCBE and NOBW, all the workmen employees took part in the two-day nation-wide strike which commenced from Monday in protest against the management’s flouting settlements and law with vindictive mass transfers.

A total of 14,000 clerks and sub-staff in the Central bank of India participated in the strike, All India Bank Employees Association (AIBEA) General Secretary Ch Venkatchalam told UNI.

As per Bipartite Settlement, clerical employees of Banks can be transferred from one station to another only in case there is surplus staff in a station and there is a corresponding deficit and shortage in another station. Other than this, employees are transferred within the same station from one branch to another, he said in a release.

The Assistant Labour Commissioner, Chennai advised the Bank to sort out the issue amicably and till then it should maintain the status quo as per Sec. 33 of the Industrial Disputes Act.

He said the General Manager-HRD issued instructions to violate the I D Act and not to hold back any transfer order.

In view of this, the United Forum of Central Bank Unions gave a call for strike on May 30 and 31, 2022. However, on May 24, 2022, Deputy Chief Labour Commissioner (CLC), Mumbai held a conciliation meeting and advised the Bank to resolve the issue amicably.

In the meeting held with the Bank, management agreed to re-transfer employees who make a representation. About 972 employees including 250 lady employees, made their representations. For one reason or the other, the management was not willing to implement its commitment, the AIBEA General Secretary said.

After waiting for more than three months, UFCBU gave the call for a strike today and tomorrow demanding implementation of the agreement of May 24, 2022, and to rectify the violations.

The Dy. CLC, Mumbai held a conciliation meeting on September 16, 2022, and again gave advice to the management to resolve the issue amicably. The Management held a discussion with the Union but did not agree to honour its commitment.

Venkatachalam said on September 17 too, the discussion continued but management maintained their adamant approach. On the next day, again a discussion took place with top management, he said the Management insisted that employees who have been transferred cannot be transferred back to their erstwhile station.

Hence the discussions did not help to resolve the issues. It is clear and obvious that management wants the freedom to transfer employees from one station to another. They are ready to violate the Bipartite Settlement and the I D Act. They are bent upon vindictively transferring employees, the top union leader remarked.

Because of this anti-labour policy of Central Bank management, the UFCBU has decided to go ahead with the two-day strike in the Central Bank of India across the country, he added.