He expressed his anguish to the media and said, “You media people write whatever you like, I don’t care; I am dedicated to my cause of Greater Tipraland.” 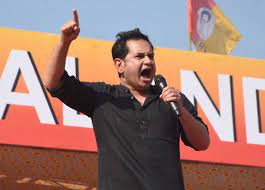 Agartala: While ruling out the possibility to forge an alliance with Congress and CPM ahead of the assembly election scheduled in February next year unless they come out in writing to the constitutional solution towards autonomy and empowerment of indigenous communities of Tripura, TIPRA Motha Chief Pradyot Kishore Debbarman toned down his anti-BJP stand on Tuesday at Jantar Mantar Delhi.

Addressing the gathering to pump up his supporters in the ethnic line, Pradyot sought the attention of Prime Minister Narendra Modi and said, “Since you can talk to forces like Hurriyat, NSCN, you can very well talk to the ‘Tiprasa’ (indigenous tribal) to fulfill their demands; if you call me, I will come and talk to have the demand for Greater Tipraland fulfilled.”

However, in an abrupt context Pradyot urged the Prime Minister, “Please tell your party men in Tripura never try to purchase me with offers of money, posts, and other her allurements, I am beyond the purchase.”

He expressed his anguish to the media and said, “You media people write whatever you like, I don’t care; I am dedicated to my cause of Greater Tipraland.”

Pradyot has been alleging that BJP leaders offered him Rajya Sabha posts and many other things to take him to BJP board but he was continuously denying the proposals but stick to his demand of Greater Tipraland – a moderate concept of a separate state within the state of Tripura raised by BJP’s ally in the government IPFT.

The BJP leaders here on Wednesday said that Pradyot Kishore has been trying to come with BJP considering its long future in the country. Since IPFT has already become the partner of BJP in Tripura, Pradyot was looking for an alternative option and coined the Greater Tipraland proposition and attempted to bring BJP under his pressure but it miserably failed.

“TIPRA Motha has resorted to attacking BJP and IPFT workers in hills and forcefully captured Tripura Tribal ADC. Pradyot thought his emotional and unrealistic proposition would compel BJP to join hands with him but he forgets running a regional party with emotion is not the strategy to deal with the world’s largest party BJP which has been working for the unification of regions and strengthening national integration,” said a senior tribal BJP leader of Tripura.

Ruling out the chance of an alliance with Congress, Pradyot said, “Rahul Gandhi, you are my personal friend but friendship will take a back seat until the demand for Greater Tipraland is

fulfilled; you can very well come forward and support this legitimate demand of Tiprasa, there is no compromise on the demand for Greater Tipraland.”

To CPM Pradyot said, “I love and care for you Sitaramji, but you do not know that your earlier government only marketed the poverty and backwardness of Tripura and its tribals, but practically nothing has been done for the people; I am with nobody who does not support Tiprasa and Greater Tipraland although I will support and ally with any party that does support our demand.”

Meanwhile, Congress and CPM leaders here declined to comment on Pradyot’s speech in Delhi and said nothing is impossible in politics and it may happen BJP will extend their support to Greater Tipraland in writing if it makes Maharaja happy. But he must realise the practicability of his demand and the immediate past record of BJP in Tripura, which committed 299 promises for coming to power in 2018.