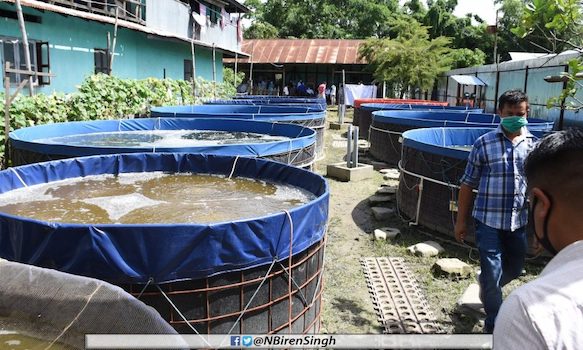 Agartala: The Tripura Government has allocated Rs 6 crore in the budget for promotion and support to biofloc technology for fish production to prevent the outflow of fund from state’s exchequer for catering to the growing demand of fish consumption, Chief Minister Biplab Kumar Deb said on Wednesday after launching an integrated fishery scheme – Mukhyamantri Nibir Matsyachash Prakalpa.

According to Deb, fishery production has increased by 5.97 per cent in last three years in the state while additional 8.20 per cent land was brought under fishery activities and number of fish cultivators has also increased by 4.62 per cent, thereby fish production increased almost six per cent and average per capita fish consumption stepped up to 25.53 kg during the period.

“Despite all efforts and initiatives to make the state self-sufficient in fish production, still almost 50 per cent of our fish demand is being catered by neighbouring Bangladesh, West Bengal and Andhra Pradesh. As a result, a handsome amount of money is going out for importing fish and other food items, which have a huge opportunity of production in the state,” Deb stated.

While urging entrepreneurs to get involved in fishery activities and production of other consumption items, Chief Minister said that his government from the very first day has been working for making Tripura self-reliant (Atmanirbhar) at least in agriculture and allied sectors.

Although it’s slow the progress is now visible and miles to go for achieving the target, Deb stated.Contemplating for inducing biofloc technology for fish production, Deb said it is an environment-friendly technique of fish farming that can be started with a very low investment.

A considerable number of people in the state have already started using this technology and are sustaining their livelihoods happily along with giving employment to others.