He warned that the matter would not be allowed to die down if the Chief Minister didn't take action against Nath.. 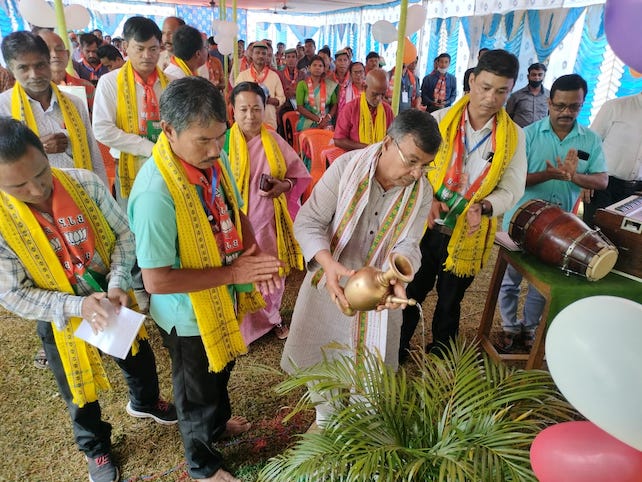 Agartala: A day after accusing Law Minister Ratan Lal Nath in the Tripura assembly of threatening a rape victim so as to stop her from going to the police, Congress legislator Sudip Roybarman on Tuesday demanded Chief Minister Manik Saha and BJP take action against the minister.

“I have given a detailed account of the incident and the involvement of the Law Minister to protect the rapist, who happens to be a top BJP leader, on the floor of assembly in the presence of the Chief Minister and all the members, which was recorded in the assembly proceedings. Now, it’s for the CM and BJP to decide the course of action,” Roybarman said.

He warned that the matter would not be allowed to die down if the Chief Minister didn’t take action against Nath..

“it will be referred to the highest level of the BJP and the Prime Minister. we will also knock on the door of the judiciary,” he said.

Roybarman alleged in the assembly that a deserted woman had approached the Lefunga police station in the Law Minister’s constituency a few days ago with a complaint of rape against a BJP leader, and his nephew.

But the police refused to accept the complaint, as the Law Minister had directed them not to register it, and instead advised the victim to meet the minister to settle the dispute.

Later, Nath called the victim and warned her not to go to the police or divulge the incident to anybody. Otherwise, her family members will lose their existing employment, her son will be pushed out of the hostel and their life will become terrible,, Roybarman told the assembly releasing a video of the victim, which she had made before the Chief Judicial Magistrate Court on Monday.

According to the statement of the rape victim, she was working in the house of the accused. Sometimes last December, she was raped by him, which was witnessed by his nephew Kashiram.

Thereafter, Kashiram started blackmailing the woman and raped her several times in the house.

“When I went to the police station, I was asked to come later, and from the night I have been getting warning calls from different numbers. Finally, Law Minister Ratan Lal Nath advised me not to go to the police and the court, and keep mum, considering the future. When I protested, he threatened me with dire consequences,” the victim was heard saying in the video, whose content UNI has not verified.

However, Nath denied the charges and said he was not aware of any such incident.

“Roybarman was maligning me in the house out of vendetta. If the woman moves court, let’s hope the investigation will bring out the truth and the agenda behind it. But I am upset with the conduct of Sudip Roybarman in the assembly. Without knowing the details based on a video, how can a responsible MLA accuse a minister of such serious charges?’ she wondered.