The government had assured the youths of 50,000 government jobs every year but till now not even 5000 jobs have been offered, he claimed. 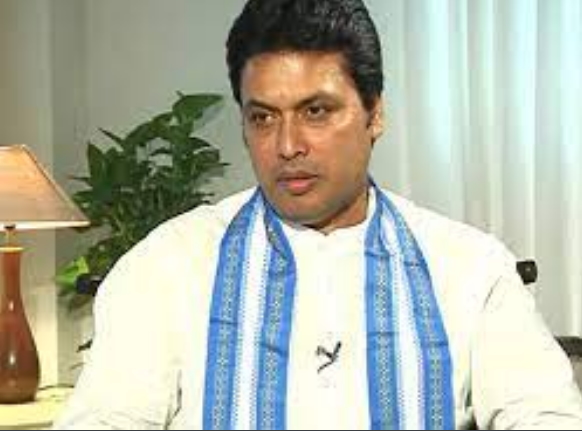 Agartala: Amid violent protests and vandalism across Tripura over alleged large scale corruption and deprivation of ruling party workers in candidate selection for Tripura State Rifles (TSR), the state government on Friday threatened action against agitators as the Left opposition demanded an investigation.

Official sources here said “worried” over the large scale resentment following the selection, Chief Minister Biplab Kumar Deb held a meeting with his cabinet colleagues and top officials on Thursday and decided to go for recruiting another 1,000 constables, including 500 women in the state police.

He asked the police to take legal action against the people who vandalised BJP offices and attacked party leaders after being rejected in the selection process.

Tripura police have already registered a few specific cases against some BJP cadres who had allegedly been involved in the attacks and in provoking people.

Over the past three days, protestors have vandalised BJP party offices in at least 13 areas and accused several leaders, including some state committee members of taking money promising job to the aspirants.

Some of those who failed to make it to the merit list have alleged people who didn’t even appear for the interview got selected.

However, the state Home Department officials denied the allegations and said, “those are baseless and an attempt to create chaos”.

The selection was completely transparent based on the criteria set by the government and the entire selection process was merit-driven, the officials claimed, adding, “We are not concerned about the commitment, if any, by any leader or individual. We have followed a process where there was no scope for manipulation or favouritism. However, the department has been reviewing the credentials of the selected candidates once again.”

Meanwhile, BJP Spokesperson Nabendu Bhattacharjee said the party doesn’t believe in providing jobs in the name of the political party or in lieu of money, rather the party believes in quality.

Refuting the involvement of any BJP leader in any irregularity, he said, “We don’t tolerate such things as well and the party will also inquire into the allegations besides the government.”

“The Chief Minister had made it clear to our leaders and workers that they should be not treated as specials as far as the job is concerned, as everyone has an equal right to jobs and only the qualified people will get government jobs based on the requirement,” he said.

Bhattacharjee said the party would not tolerate any attempt at corruption at any level.

On the other hand, CPI-M state secretary Jitendra Chowdhury demanded a judicial enquiry by a sitting judge of Tripura High Court. “Since the BJP came to power there is nothing in order, rather everything is absolutely unconstitutional, unduly, and illegal. So this is the outburst of the deprived”.

He said the protesting youths are identifying themselves as members of the core BJP who worked to bring the party to power and “they are very much close to the BJP leaders”.

The government had assured the youths of 50,000 government jobs every year but till now not even 5000 jobs have been offered, he claimed.

The youths are facing an uncertain future and “have been created by the Biplab Kumar Deb government” and now they have started reacting, Chowdhury added.