The pineapple export initiative which began in 2019 was disrupted due to the OCIVD pandemic and again got a boost with the export of processed pineapple to Europe. 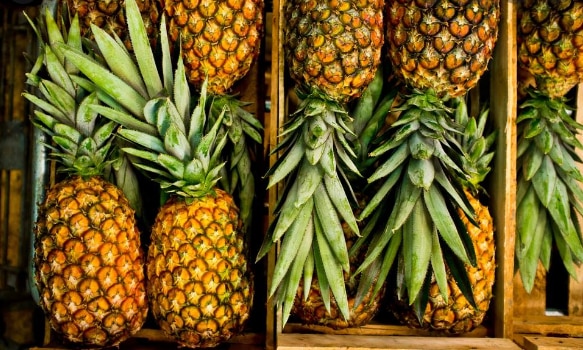 Agartala: Tripura Chief Minister Biplab Kumar Deb flagged off the first consignment of 40 MT canned pineapple consignment to Hamburg in Germany on Sunday from the Industrial growth centre at Kumarghat in Unokoti district through waterways, here on Sunday.

Besides producing world-class juicy sweet queen pineapple in summers, the Northern part of Tripura is famous for large size Kew variety pineapple, harvested till the monsoon season but its local consumption is not much although it’s high yielding. The state government for the last three years developed an export chain of raw pineapple to Middle-East countries and Europe.

According to officials of the state horticulture department, this is for the first time after closing the operation of NEERAMAC’s fruit concentration centre in 2007-08, the organically processed pineapple has been exported. The pineapple export initiative which began in 2019 was disrupted due to the OCIVD pandemic and again got a boost with the export of processed pineapple to Europe.

Applauding the self-reliance initiative of pineapple growers of Darchai and Nalkata village belonging to Darlong tribe Chief Minister underlined that once discouraged to continue their traditional pineapple orchards, the Gen-X of Darlong families have found a new way of earning, inspired by the positive and conducive environment that has now been created by BJP-IPFT government.

The growing demand for proper management has ensured fair prices to the farmers and also, the state government has been facilitating to development of a forward market linkage. As a result, pineapple which was earlier dumped and not even priced at Rs 2/- in the local market, is now fetching a stable price not less than Rs 15-20/-, Deb pointed out.

“I am delighted visiting the pineapple orchards and interacting with pineapple growers. I am glad to know that with the help of Tripura government schemes, farmers are able to get the appropriate value for pineapples and they are happy to sell their products in the global market,” Deb told the media.

“Rami Darlong, a woman entrepreneur from Nalkata, grows pineapples on three hectares of hilly land. Attending her pineapple orchard, I learnt about the modern sophisticated yielding methods and procedure of enhancing production”, he said adding that in addition to conventional yields, value-added cash and other fruit or crop production has been helpful in increasing the income of farmers.

Japanese diplomat expresses interest in cooperation in a communication system