Roybarman smelled a huge corruption in the procurements of protective materials to fight against Covid and ran the Covid hospital for two long years. 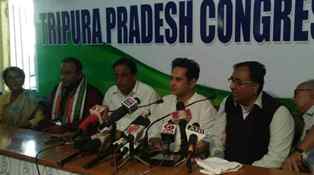 Roybarman smelled a huge corruption in the procurements of protective materials to fight against Covid and running the Covid hospital for two long years.

It was found that the patients had been suffering from inadequate food and services in the Covid centres although crore of rupees expenditure was booked for the purpose, he alleged.

Similarly, poor quality face mask and sanitizers in bulk supplied by a gang led by a BJP state functionary violating the tender norms at high rate when the matter was brought the notice of the government, the concerned officer was pressurized to approve it but when refused he was transferred and false charges were slapped on him.

A top BJP leader without competitive bidding awarded the food supply order to her gang at high cost but most of the patients were provided food and allegedly whatever little had been supplied was very poor and it continued for a long time, Roybarman alleged.

Moreover, Tripura government had accepted cash donation from the public and several corporate bodies during Covid pandemic to help the distress people but it’s accounting was not disclosed yet, he said adding, “The public sector undertakings donated a huge protective and curative medical equipments of Covid19 to the government but expenditure for most of those items were also booked in the department.”

Besides, ONGC, OTPC, GAIL, NEEPCo and Tata Trust like organizations were forced to supply oxygen concentrators and other medical equipments huge in number but unfortunately, most of those items had not even been unpacked and dumped in the store, so why the government wasted the public funds, Roybarman questioned.

“The government has taken money from the public in CM Relief Fund but not published the expenditure statement. The then CM Biplab Deb in May 2020 had announced that Tripura was expected to get the benefit of Rs 4802.88 Cr from PM’s Atmanirbhar Bharat package. We want to know how much Tripura got from the package and how the money was spent?” Roybarman questioned.

“We know in the name of Covid management cores and cores of rupees were looted by the contractors at behest of ruling BJP from Tripura in two years, which needs a special audit and through enquiry into the expenditure to clarify the public doubt before the ruling party seek votes after three months and Congress hopes CM Dr Manik Saha claimed to be an honest man probe his transparency,” he pointed out.

He further accused of BJP led government of cheating the people once again by highlighting the increase of different monthly social pensions to Rs 2000. Actually, the government has devised a mechanism to eliminate the eligible beneficiaries from the list, as their main purpose of propaganda is over.

The government notification said the beneficiaries would be eligible for the social pension only if the 60 years and above people will submit a Birth Certificate either Class X Admit Card or PRTC, which the underprivileged sections don’t have and from where they will bring these certificates at the old age. Previously, the beneficiaries got social pensions based on Ration and Aadhar cards, Roybarman added.