In a letter to Deputy Chief Minister Jishnu Dev Varma, Dey demanded an immediate inquiry into the case and revert back the money to TGB; otherwise, it would hit the bank in turn the credit ratio to the poor and marginalized sections would be affected. 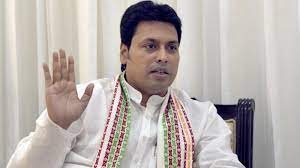 The state Congress Vice President Tapas Dey said that as per the decision of the state government they would keep their fund in two local banks of the state TGB and State Cooperative bank, as their performance of supporting state schemes to poor sections of Tripura is exceptionally good compared to nationalised banks.

In a letter to Deputy Chief Minister Jishnu Dev Varma, Dey demanded an immediate inquiry into the case and revert back the money to TGB; otherwise, it would hit the bank in turn the credit ratio to the poor and marginalized sections would be affected.

“We suspect the interest of some big fish behind such an abrupt decision going beyond the government policy. Sudden shifting of the entire amount to Canara Bank is an unmistakable sign of a massive scam to achieve personal benefit of some top level individual,” Dey stated in the letter.

He said that Tripura Gramin Bank (TGB) has got the largest banking network in the state extending deep into the interior areas inhabited by tribals with 148 full-fledged branches and a few more micro branches for only deposit and withdrawal. Moreover, as a rural bank the TGB gives marginally more interest on deposits than what is offered by the nationalized banks.

On the other, Canara Bank which has got only 13 branches in the state and gives less interest can never match the services rendered by the TGB. Moreover, thousands of Samagra Shiksha Abhiyan (SSA) teachers posted across the state have their accounts with the TGB branches and they will find it very troublesome and difficult to draw salaries from the limited number of Canara Bank branches “, the letter informed.

Dey also claimed in his letter that the sudden withdrawal of such a huge fund from the TGB within a year of the withdrawal of interest will greatly weaken the capital of the Gramin Bank that renders the best possible banking service to people of Tripura, especially to the poorer sections in rural and hilly areas. “It is crystal clear that the transfer of the big SSA fund within a year of the withdrawal of interest has been done with ulterior motives in lieu of illegal gratification from the Canara Bank authority either in the form of cash bribes or easy loans that may not be refunded at all or both.