Deb alerted the elected members of the urban local bodies to stay away from corruption. 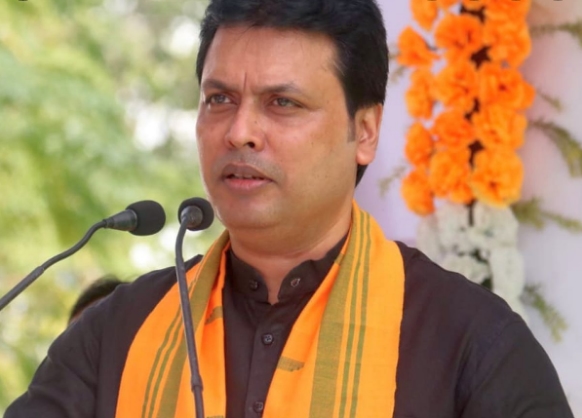 Agartala: Tripura Chief Minister Biplab Kumar Deb today reaffirmed that people of the state would re-elect the BJP government in the 2023 assembly elections to take forward the vision of Prime Minister Narendra Modi to build a new India while addressing the swearing-in ceremony of the Mayor and Corporators of Agartala Municipal Corporation (AMC).

Deb said people of urban Tripura have made a trial for next assembly elections in the just concluded civic poll where BJP won all the urban local bodies (ULBs) and opposition parties weren’t able to find the candidates in most of the areas. They tried to foil the elections in multiple ways including misguiding the Supreme Court but the people of Tripura threw them out.

He advised the newly elected body of AMC to dedicate themselves to resolving the peoples’ problem and warned, “I will keep a strict watch on the works being done and will visit all wards to see the pace of development work. I am sure we will achieve power in the 2023 assembly election but we shall have to gain 70% of total votes; I urge you to work in that direction.”

He reiterated that his council of ministers have already finalised a blueprint for the development of the state till the year 2048 and all the urban local bodies must work keeping this target in mind; problems of civic life like roads, illumination, water supply and other amenities will have to be taken care of and peoples trust must be won and lay the foundation for BJP’s success in the all upcoming elections.

Deb alerted the elected members of the urban local bodies to stay away from corruption.

West Tripura District Magistrate Debapriya Bardhan administered the oath of office and secrecy to all 51 Corporators of AMC including Mayor, Deputy Mayor and Mayor-in-Council at Rabindra Satabarshiki Bhawan. The ceremony was attended by the entire cabinet except for Tribal Welfare Minister and IPFT’s Mevar Kumar Jamatia.

New Delhi: India has registered 14,917 new Covid-19 cases, the Health Ministry said on Monday. According to the bulletin issued...
Nation