Mentioning the GIS-based property tax system, Saha said it is ready for launch and the government will introduce it from 2023-24, which will increase Municipal Revenue by at least 20 percent. 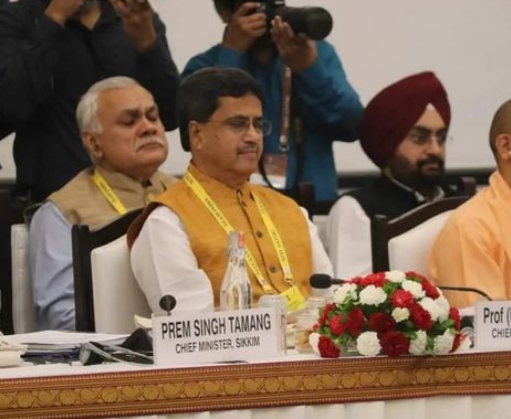 Dr. Saha said for providing food safety, and nutritional security, improve soil health, and the socio-economic status of the farmers, his government has been working on a three-year plan set to conclude next year to bring diversification in 50,000 hectares with Maize and Blackgram.

The government has given emphasis on the adoption of newly released hybrid and high-yielding varieties, cluster cultivation, extending irrigation facilities, mechanization and processing support, capacity building of the farmers, and digitalization of agriculture.

The State level Steering Committee and Implementation Committee have already been constituted. Both the panels have held their first meeting.
The state has finalized the Standard Operating Procedure for the creation of a farmers’ database, he told the meeting chaired by Prime Minister Narendra Modi.

Reporting on the implementation of the National Education Policy at the school level, the Chief Minister stated that after the formation of the present government in 2018, the education system has been oriented towards the holistic development of children with special emphasis on quality, access, and inclusivity to equip all children with 21st-century skills.

The state government will invest Rs 500 crore in “Mission 100 – Vidyajyoti Schools” in the next three years for the development of infrastructure; creation of hostel facilities; recruitment of high-quality teachers with in-service training; and ensuring seamless integration of arts and sports with academic curriculum.

Mentioning the GIS-based property tax system, Saha said it is ready for launch and the government will introduce it from 2023-24, which will increase Municipal Revenue by at least 20 percent.

Apart from these, the master plan for 20 urban local bodies is in an advanced stage and would be finally published in June 2023. “We have established Tripura Urban Planning and Development Authority for proper Urban Planning and development of infrastructure in more than 500 sq KMs,” said the chief minister.

For better management of water and sewerage services, Tripura Jal Board started functioning on 1st April 2022 and Tripura Real Estate Regulatory Authority (T-RERA) has been established and 84 real estate projects with 3,134 apartments registered, he added.