The BJP Vice President Dr Ashok Sinha told the media Friday there is no concept of good leftist or bad leftists and even during the freedom struggle India witnessed their role. 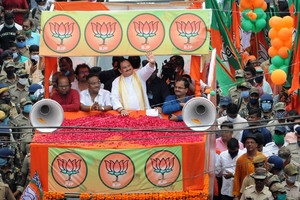 Agartala: The BJP Tripura state committee has decided to hold at least a hundred rallies across the state on April 17 next protesting against growing left-wing extremism in the country. The rallies will pay tribute to 22 CRPF jawans martyred in the Maoist attack on the Sukma border of Chhattisgarh last week.

The BJP Vice President Dr Ashok Sinha told the media Friday there is no concept of good leftist or bad leftists and even during the freedom struggle India witnessed their role. The left-wing ideology is driven by anti-nationalism, bloodshed and violence – the recent incident of Chhattisgarh once again proved leftist are the same.

“Time has come to raise a united voice against leftists who live in India but practicing the philosophy of other countries. The supreme sacrifice of our CRPF jawans made us to believe unless the country stands together against leftists; the country will suffer from more menaces and trouble and we shall raise the voice on April 17 through our programme,” Dr Sinha said.

He pointed out that left wing terror has emerged as a new menace against the nation and this needs to be protested unitedly. Earlier the state of West Bengal and Tripura had witnessed such terror and Kerala is still facing the problem even in governance due to leftists rule.

Over the past two and half decades, extremism has been trying to destabilize the nation as well as to demoralize the security forces but not getting a befitting reply. In the protest demonstrations against; BJP will expose the left ideology of terror and aware the people against the ideology of terrorism, bloodshed and anti-national activities, Dr Sinha added.

Tripura CM leaves for Shillong with CS and DGP