After 40 days of taking oath as a minister, Pratima Bhowmik arrived in the state from New Delhi. 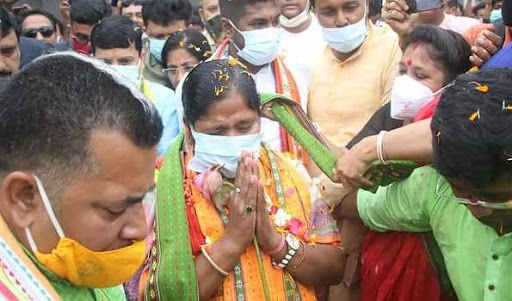 Agartala: Hundreds of BJP workers on Monday welcomed the first daughter of the soil of Tripura in the union cabinet Pratima Bhowmik who has been inducted in the second reshuffle of Narendra Modi’s ministry as Minister of State for Social Justice and Empowerment and accorded mega receptions.

After 40 days of taking oath as a minister, Pratima Bhowmik arrived in the state from New Delhi.

A large number of youths and women led by BJP state Vice President Rajib Bhattacharjee and state’s social welfare minister Shantana Chakma received her in the morning at MBB airport here with a mega garland and high pitch slogans.

She has met her mother and family members at ancestral home at Banshpukur in Sonamura of Sepahijala district.

A motorbike rally has escorted her to BJP headquarter in the city where she was felicitated hereby state BJP leaders. After arrival Bhowmik has also met with Chief Minister Biplab Kumar Deb and Deputy Chief Minister Jishnu Dev Varma in the civil secretariat and interacted about several administrative issues and party functioning as well.

his cabinet. Bhowmik will also address the party workers in several locations and hold meetings with the leaders to strengthen BJP in Tripura.

She is scheduled to meet eminent personalities of the state including Padmasree awardees, besides holding road-show on Boxanagar and Bishalgarh.

Talking to media Bhowmik expressed her gratitude towards the Prime Minister and central BJP leadership for giving a chance for Tripura representative to serve in her cabinet.

“Although Silchar resident Santosh Mohan Dev become central minister getting elected twice from Tripura and Dr Trigoona Sen of West Bengal elected from Tripura, I am the first resident of Tripura being included in the union cabinet because of Modi’s immense love and respect towards the state and I feel I am the representative of each and everyone of my state irrespective of party and ideology,” Pratima told media.