Though this eclipse is a Total Lunar Eclipse, people at few places in India will see only a small part of the Moon's Disk darkened provided the Moon rises before 6.23 pm in that location. 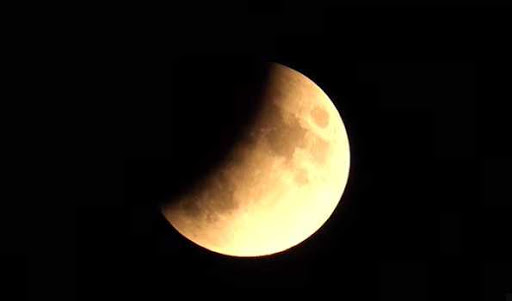 Hyderabad: The first Eclipse among the four eclipses—- two Lunar and two Solar in 2021 will occur on Wednesday.

Though this eclipse is a Total Lunar Eclipse, people at few places in India will see only a small part of the Moon’s Disk darkened provided the Moon rises before 6.23 pm in that location.

Planetary Society of India (PSI) Director N Raghunandan Kumar told UNI that, across the world this Eclipse will be visible in the region covering South America, North America, Asia, Australia, Antarctica, the Pacific Ocean and the Indian Ocean.

‘As the timings of this eclipse occur even before Moonrise in India, except few places, rest of India will miss this eclipse’.

Visible In India at End of Umbral Phase – Few Places after Moonrise:

In India, just after moonrise, ending of partial phase of the eclipse will be visible for a short span of time from North Eastern parts of India except Sikkim. People in some parts of West Bengal and some coastal parts of Odisha can have glimpse of this eclipse before the end of the darker umbral phase, Mr Kumar said, adding that in simple words places in India where Moon Rises before 6.23 pm have an opportunity to see Disk of Moon partially darkened.

People in Port Blair will get first and best opportunity in India to see this eclipse for 43 minutes as the Moon rises there at 5.38 pm.

The rest of the country will miss umbral phase due to delayed Moonrise depending on their location. While the Penumbral phase lasts till 7.21 pm people across India or World cannot appreciate this phase of the Eclipse as it unnoticeable with Moon immersed in very lighter outer Shadow of Earth, he added.

A Lunar Eclipse occurs when earth in course of its orbit around sun, comes between moon and sun, such a way that moon his hidden in the shadow cast by earth.

On May 26 Moon will be a Full Moon and importantly during its Journey around Earth, Moon will reach closest point to Earth called “Perigee”. Because of this Moon will be 14% bigger and 30% brighter, Mr Kumar said.

He said it is a fact that Full Moon occurs every month but not exactly on the day when its close to earth. So occurrence of full moon on Wednesday when moon is close to earth make it special.

Supermoon is word coined by Western Astrologers and International Astronomical Union doesn’t use this Unscientific term to explain this phenomenon.

During Lunar Eclipse, Earth is in between Sun & Moon such a way that it blocks Sunlight reaching moon. However, some light does manage to hit the lunar surface passing through Earth’s Atmosphere. The air molecules from Earth’s atmosphere scatter out most of the blue light. The remaining light reflects onto the Moon’s surface with a red glow, making the Moon to appear Orangish Red in the night sky.

So calling Eclipsed Moon as “Blood Moon” because it appears red is ‘unscientific’ term and creates unnecessary fear among public, he explained.

Kumar said on June 10 there will Annular Solar Eclipse, on November 19 Partial Lunar Eclipse and on December 4 a total Solar Eclipse will occur.