With this win, Dahiya became only the second Indian wrestler in history to enter the gold medal match at the Olympics. 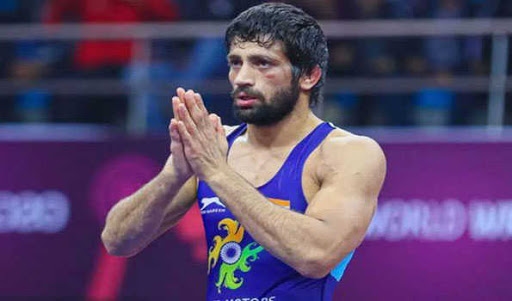 With this win, Dahiya became only the second Indian wrestler in history to enter the gold medal match at the Olympics.

Before Dahiya, Sushil Kumar was the only Indian to the final at the 2012 London Games but had to settle for silver.

Ravi is now only the fifth Indian wrestler to have won an Olympic medal after KD Jadhav, Sushil Kaumar, Yogeshwar Dutt and Sakshi Malik.

The Indian wrestler on his Olympic debut will now face ROC’s Zavur Uguev, a two-time world champion, in the final.

Dahiya conceded the first points of the bout due to a passivity call but struck back instantly with a two-point take down at the Makuhari Messe Hall in Chiba.

Leading 2-1 heading into the second period, Ravi Kumar was dealt a crushing blow soon after the action restarted.

After the end of the first period, Dahiya had a 2-1 lead but he was dealt a crushing blow soon as Sanayev attacked the Indian’s left leg and caught hold of ankles to twirled him around a few times to flip the score 9-2 in his favour.

Dahiya made a brilliant comeback by pushing Sanayev out of bounds to reduce the deficit to 9-5.

The move appeared to injure the Kazakh wrestler, but he opted to continue.

With just 50 seconds left on the clock, Ravi scored a two-point takedown and converted it to a pin – exposing both his opponent’s shoulders to the mat – and won the bout by fall.

Dahiya entered the semi-finals after beating Bulgaria’s Georgi Vangelov in the quarters (14-4) and Colombia’s Oscar Tigreros in the round of 16 (13-2) by technical superiority.

Meanwhile, another Indian grappler Deepak Punia suffered a 0-10 loss on technical superiority in the semi-finals of the men’s freestyle 86kg category against USA’s David Taylor.

The American wrestler was too good for the inexperienced Indian, who was never in the fight.

The 22-year-old Deepak will now head into the bronze medal bout on Thursday. He will face the winner of the repechage match between Myles Amine of San Marino and Belarus’s Ali Shabanau.