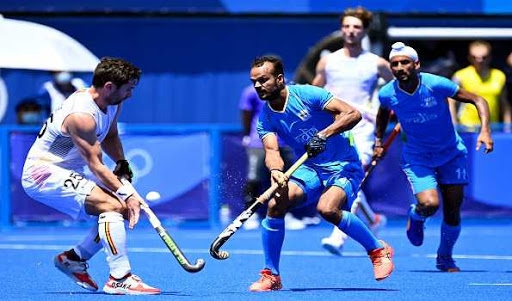 Tokyo: India’s hopes to play in an Olympic final were dashed after they lost 5-2 to the reigning world champions Belgium in the 1st semi-final of men’s hockey at the Tokyo 2020, here on Tuesday.

For India, Harmanpreet Singh (7′) and Mandeep Singh (9′) scored the two goals at the Oi Hockey Stadium.

India’s hunt for a medal, however, will continue when they play the bronze medal play-off match on Thursday against the losing team from the second semi final between Australia and Germany.

Earlier in the match, both teams got off to a blistering start in the first quarter. While there was early pressure from Indian attackers, it was the World Champions who drew first blood in only the 2nd minute of the game.

It was Loick Luypaert stepping up to take the flick and scored a stunning goal. India, however, were quick to respond to the early 0-1 setback when they were awarded back-to-back PCs in the 7th minute.

It was Harmanpreet Singh who came up with a perfect dragflick, scoring his 5th goal of the tournament. The Men in Blue extended their lead to 2-1 in the 9th minute when a brilliant assist by Amit Rohidas was picked up beautifully by Mandeep Singh who struck a tomahawk from top of the D.

The first quarter continued to be action-packed with Belgium attackers gunning for a 2-2 equaliser, but India held on to the ball possession.

Early minutes of the second quarter saw Belgium being awarded PCs. They equalised in the 19th minute when their leading goal scorer Alexander Hendrickx took his first PC of the match and did brilliantly to hood-wink India’s experienced goalkeeper PR Sreejesh, sending a powerful flick to the right bottom of the post.

The third quarter was goalless as both teams couldn’t convert from the chances they created. India’s opportunity to take a lead in the 39th minute through a PC was defended well by the Belgians.

These 15 minutes seemed slightly dull compared to the first two quarters that saw tremendous tempo created by both teams who lived up to the billing of being hockey powerhouses of the world.

In the final quarter, an early chance created by India went in vain when forward Lalit Upadhyay tried to win a PC but couldn’t connect. Things went against India in the 49th minute when Skipper Manpreet Singh was given a green card.

This was when Belgians won three consecutive PCs. Alexander Hendrickx, their world class draflicker, scored off the third attempt to put Belgium ahead once again by 3-2.

Under pressure, India made infringements in the circle that gave away three more PCs in the following minutes. Hendrickx stepped up to convert the opportunities and completed his hat-trick of goals as he fetched Belgium a formidable 4-2 lead in the 53rd minute.

Though India made valiant attempts to push for a goal, a well-structured Belgium defence was too hard to beat for India’s forwardline.

In the final minutes of the match, India chose to remove their goalie and put an extra attacker on the pitch, but the risk did not materialize. While Harmanpreet’s tomahawk was saved well by Vanasch with one minute left, Belgium scored their fifth goal on a counterattack.

It was John-John Dohmen who struck the goal for Belgium, ending India’s hopes of playing in an Olympic final.