TN Governor invites CM-designate Stalin to form govt, swearing in on May 7

He also submitted a letter containing the support of 133 MLAs, including those of allies, who had contested the April six Assembly polls, on the DMK's 'Rising Sun' symbol. 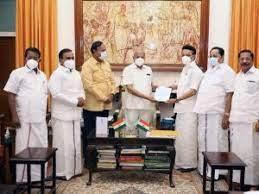 Chennai: DMK President and Chief Minister-designate M K Stalin will be sworn in as Tamil Chief Minister for the first time at a simple function to be held at Raj Bhavan on May seven.

Governor Banwarilal Purohit will administer the oath of office and secrecy to Mr Stalin and his Council of Ministers at 0900 hrs on Friday, it was officially announced by Chief Secretary Rajeev Ranjan here Wednesday.

He also submitted a letter containing the support of 133 MLAs, including those of allies, who had contested the April six Assembly polls, on the DMK’s ‘Rising Sun’ symbol.

He also submitted the list of his Council of Ministers to the Governor. A few hours later, Purohit invited Stalin to form the next government on May seven.

The swearing-in ceremony will be a low key affair in view of the second wave of the COVID pandemic. Stalin, who led the DMK return to power for a sixth time after a gap of ten years, was unanimously elected as the Legislature Party Leader last evening at a meeting of the newly-elected MLAs held at party headquarters Anna Arivalayam.