The Left parties, which have once ruled the state for 35 years, and Indian National Congress failed to open their account in Bengal 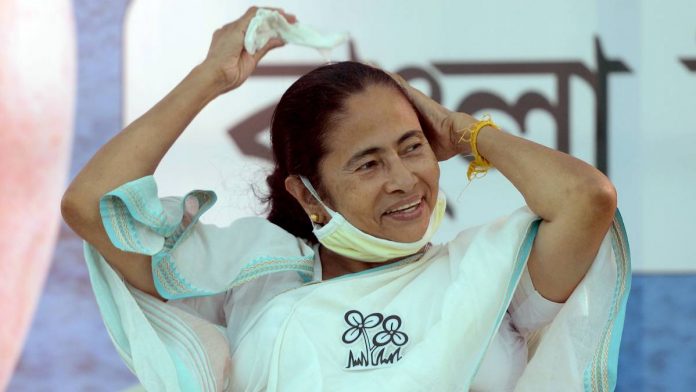 New Delhi: Mamata Banerjee-led All India Trinamool Congress looks set to retain the power in West Bengal, upsetting the pollsters who predicted a neck-and-neck contest with the BJP, as it was leading comfortably in 192 seats and won 21 of the 292 seats in the counting of votes for Assembly elections till 1900 hrs.

The Bharatiya Janata Party was at the distant second, leading in 75 seats and winning three seats (78).

The Left parties, which have once ruled the state for 35 years, and Indian National Congress failed to open their account.

The AIADMK was leading in 75 seats and won two seats while the BJP was leading only in three seats of the total 234 seats.

The Left Democratic Front in Kerala has created a history as it will be the first to retain power in the coastal state which has an odd history of changing goalpost every five years. The LDF won 44 seats and was racing ahead in 49 seats while the opposition Congress-led United Democratic Front bagged 17 seats and leading ahead in 25 seats of 140 seats. The BJP failed to open its account.

In Assam, Sarbananda Sonowal-led NDA is set to retain the northeast state as it won seven seats and is leading in 59 of 120 seats. The opposition UPA bagged two seats and was racing ahead in 44 seats of the total 125.

All India N R Congress-led BJP alliance in Puducherry is heading towards a victory as it won 11 seats and leading in three seats while Congress bagged four seats and was leading in two seats. The Congress recently lost the majority in the Territorial Assembly as several MLAs resigned.

In the battle of prestige in Nandigram, Ms Banerjee lost and BJP’s Suvendu Adhikari was declared winner, post which the TMC has demanded a recounting of votes.

The TMC said that counting for Nandigram is not complete and the EC announced the results without counting the last round.

Banerjee addressing a press conference termed the results as “victory of democracy”. She said the swearing-in ceremony will be a low-key event in view of the prevailing Covid-19 situation.

However, despite the strict warning from the Election Commission of India of no victory processions or gatherings in view of the virulent second wave of Covid-19, celebrations were seen in some parts of Tamil Nadu and West Bengal.

The ECI issued a notice to chief secretaries of the four states and one union territory to check such gatherings.

The elections were held between March 27 and April 29. West Bengal went for polls in eight phases. However, polling on two seats was postponed due to the death of candidates. Voting for Assam was held in three phases while in Tamil Nadu, Kerala and Puducherry, the polling was conducted in a single phase.