He said party workers get multiple disbursements while other beneficiaries are struck off without explanation. 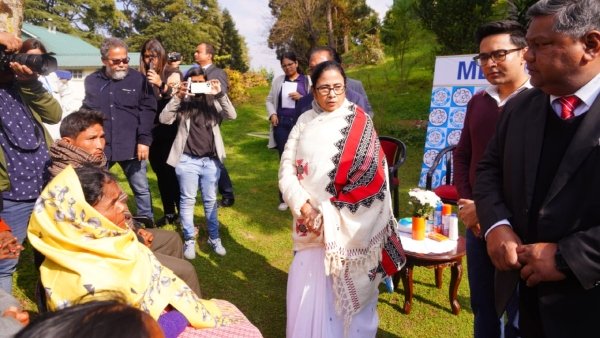 Shillong: The BJP, which is a constituent of the ruling Meghalaya Democratic Alliance, on Thursday said Meghalaya Financial Inclusion for Women Empowerment Scheme (MFI WE) unveiled by Chief Minister Mamata Banerjee is a “failed scheme” in West Bengal.

“The scheme in West Bengal is already marked with favouritism in the selection of beneficiaries,” State BJP Spokesperson, Mariahom Kharkrang said, adding that the “failed scheme” is already on-going in West Bengal under the aegis of ‘Lakshmir Bhandar’.

He said party workers get multiple disbursements while other beneficiaries are struck off without explanation.

Banerjee had recently unveiled the “We Card” in which a woman of a household would be provided Rs 1000 monthly if voted to power. This election freebie is in line with the Lakshmi Bhandar that is in vogue in West Bengal in which all adult women from SC and ST categories in a household are provided with a monthly freebie of Rs 1000 monthly.

He said the TMC in Meghalaya like the East India Company has come into the state with a mindset to plunder its peace and harmony and to create in Meghalaya another mishap like the West Bengal.

Kharkrang said the scheme is also particularly lucrative for the party as it allows for easy misappropriation and diversion of funds.

Moreover, he claimed that the scheme is being marketed as a tool to empower women, the fact is the condition of women in West Bengal is far from good as the State reports the highest number of rapes and kidnappings of women in the country.

“A rape occurs in West Bengal almost every 8 hours under the governance model of the TMC,” the retired IPS officer said.

Stating that the TMC has a track record of corruption, hooliganism, violence-based politics, appeasement and on turning independent states into dole dependant societies, Kharkrang likened TMC in Meghalaya to the “East India Company” and that it has come into the state with a mindset to plunder its peace and harmony and to create in Meghalaya another mishap like in West Bengal.

“TMC is a regional party of West Bengal with no understanding of Meghalaya and its people. While TMC spoke about wanting sons of the soil to run the state, they would continue to run a proxy government from West Bengal. it is already evident from the promises that they are making. They wanted to replicate their failed West Bengal model of mis-governance in Meghalaya as well,” he said.

The BJP Spokesperson said that the TMC having fed on the development funds and opportunities of West Bengal, now wants to deprive Meghalaya too.

“Politics in Meghalaya is non-violent and the political discourse is largely decent.

However, TMC is known for its politics of revenge and violence. The nation watched in horror as TMC goons descended upon their political rivals with vengeance after the last assembly elections in West Bengal. Political murders are everyday news in West Bengal,” Kharkrang stated.