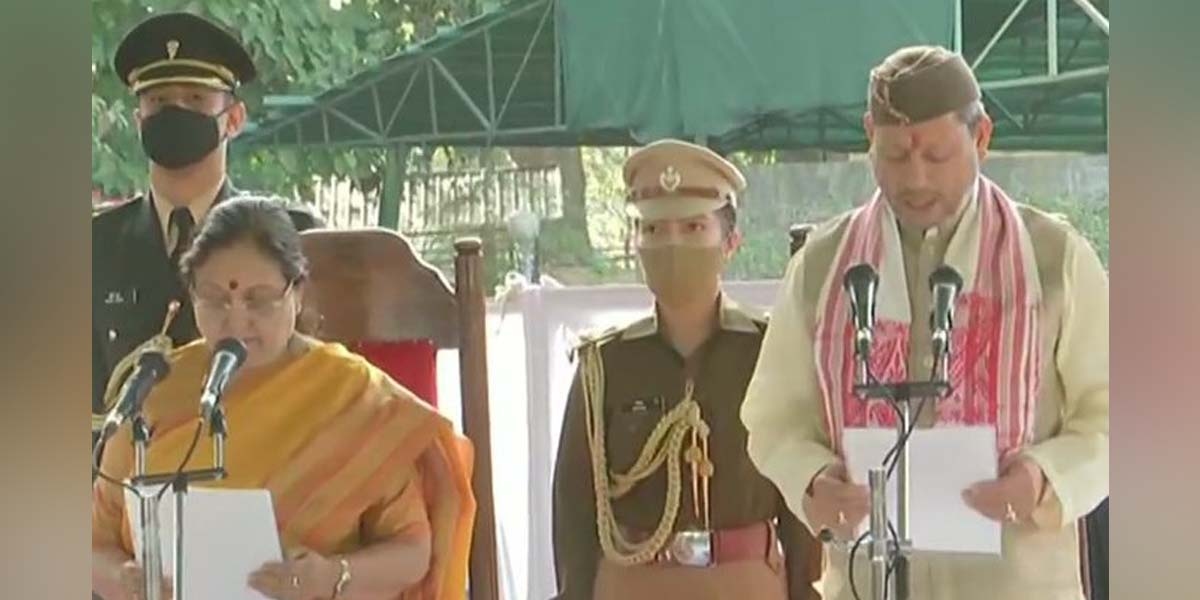 Dehradun: Bharatiya Janta Party MP Tirath Singh Rawat was sworn-in as the ninth Chief Minister of Uttarakhand on Wednesday, a day after his predecessor Trivendra Singh Rawat tendered his resignation amid allegations of non-performance and resentment within the party over his style of functioning.

The 56-year-old leader, who was serving as a Lok Sabha MP from Garhwal, had been the chief of the Uttarakhand BJP in 2013-15 as well as an MLA. He edged out over speculations of prominent candidates like Union Minister Ramesh Pokhriyal Nishank and Uttarakhand Minister Dhan Singh Rawat being picked up for the coveted post.

“I was Sangh pracharak and a minister under the leadership of Trivendra Singh Rawat. I am grateful to Prime Minister Narendra Modi, Amit Shah and the national president. I had never imagined this day,” Rawat said over his appointment.

His name was shortlisted for the top post at a state legislature party meeting at the BJP headquarters in the morning under the watch of party national vice-president and former Chhattisgarh chief minister Raman Singh.

Prime Minister Narendra Modi congratulated the newly appointed Chief Minister saying that Mr Rawat brings with him vast administrative and organisational experience. “I am confident under his leadership the state will continue to scale new heights of progress,” Modi said.

Trivendra Singh Rawat, who has become yet another name to be added to Uttarakhand’s long list of Chief Ministers who could not finish their term, resigned on Tuesday after days of speculation about a leadership change in the state. Soon after Tirath’s nomination, Trivendra Singh Rawat expressed confidence that under the leadership of new Chief Minister, the state will see an all-round development.

Notably, when the state of Uttarakhand was formed in year 2000, Rawat was inducted into the state cabinet as Education Minister. In 2012, he won the Assembly elections from the Chaubattakhal constituency and became Uttarakhand BJP chief in the very next year.

Tirath gained the political prominence after he won the Lok Sabha elections in 2019 from Pauri Lok Sabha seat by defeating his nearest rival Manish Khanduri by a massive margin of 2.85 lakh votes.

Rawat has an uphill task as only one year is left for Assembly polls in the hill state.