The event scheduled to be held between January 13 to 29, 2023 will witness 16 top teams battle it out for the coveted trophy at state-of-the-art venues in Bhubaneswar and Rourkela. 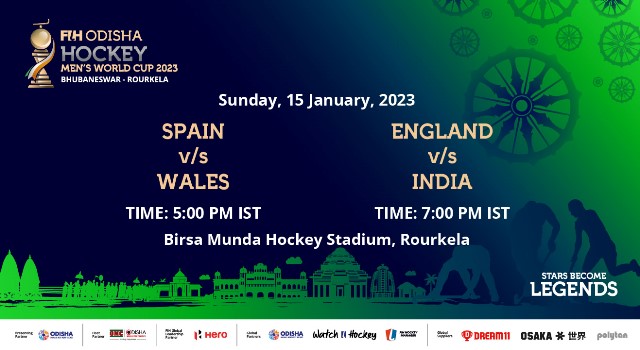 Bhubaneswar: Marking the 50-day countdown milestone on Thursday, hosts Hockey India announced the commencement of ticket sales, giving hockey fans around the world an opportunity to secure their seats to witness enthralling hockey action in Odisha – a global hockey hub.

The event scheduled to be held between January 13 to 29, 2023 will witness 16 top teams battle it out for the coveted trophy at state-of-the-art venues in Bhubaneswar and Rourkela.

With Odisha State Government and hosts Hockey India leaving no stone unturned in providing world’s best infrastructure at the iconic Kalinga Hockey Stadium and the newly built Birsa Munda International Hockey Stadium in Rourkela, the prestigious event promises to be an incredible experience for both fans and participating teams.

On the occasion, Padma Shri Dr Dilip Tirkey, President, Hockey India, expressed, “The final preparations for the FIH Odisha Hockey Men’s World Cup 2023 Bhubaneswar – Rourkela are underway. We are eagerly waiting to welcome all the participating teams and hockey lovers from around the globe to be part of this historic event.”

“The Odisha State Government yet again has set a new global standard by providing an incredible venue like the Birsa Munda International Hockey Stadium in Rourkela which is the heart of Odisha’s hockey belt and features state-of-the-art facilities including more than 20,000-seating capacity. With two venues being used this time, the event is certainly going to be bigger and more exciting than any other hockey tournament,” he added.

The Birsa Munda Hockey Stadium will host its first-ever hockey match on the tournament’s opening day, with England taking on Wales on January 13. This match will be followed by hosts India squaring off against Spain in their campaign opener. Meanwhile, in Bhubaneswar, former Olympic Champions Argentina will take on South Africa while World No.1 Australia will play France.

Ace drag-flicker Harmanpreet Singh, who is currently leading the Indian Men’s Hockey Team for a five-match preparatory series against Australia reflected his team’s excitement as the ticket sales open for the public.

He said, “It was a full house in Bhubaneswar during the FIH Pro League matches, we played in front of our fans after almost two years, and it was a great experience. We are looking forward to playing in front of them during the World Cup at a brand-new stadium in Rourkela where we open our campaign and will be playing there for the first time. We can’t wait to be in Rourkela and see the world-class infrastructure that has been built by the Odisha Government. The Birsa Munda International Hockey Stadium is a testament to Hon’ble CM Shri Naveen Patnaik Sir’s love for the sport and it is truly his gift to not just hockey fans in Odisha but all around the globe.”

“We are fortunate that we have got the opportunity to play an event like the World Cup in front of our home crowd for the second consecutive time. We will give our best, and hopefully make it a tournament to remember,” he added.