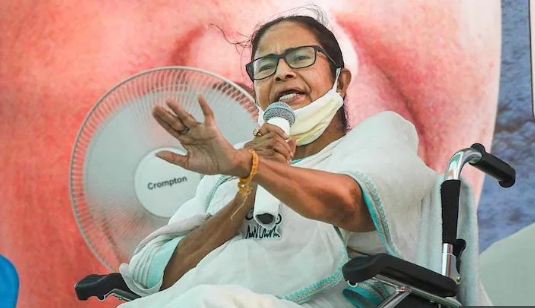 “I will not allow capturing Bengal by Gujarat,” the chief minister said.

Banerjee said, “I will win Bengal on one leg and in the future, will get victory in Delhi on two legs.”

The TMC supremo said that BJP cannot find a local candidate to contest polls as “they don’t have any locals, all their people are borrowed from either TMC or CPM.”

She said that those who “can’t say Sonar Bangla properly, cannot rule Bengal.”

The chief minister urged voters to help TMC score a landslide victory in the assembly elections and alleged that anything less may help the BJP form a government because of horse-trading.

“I am winning from Nandigram but this election is not about me. You have to assure that TMC should win more than 200 seats otherwise BJP will use their money power to buy traitors,” she said.

“What was the need for an eight-phase election? It was done by BJP Mandal. Given the present situation (COVID), shouldn’t they have wrapped up the election within a short period of time?” the TMC supremo questioned.