The women VRAs were arrested and detained in various police stations at midnight, he said. 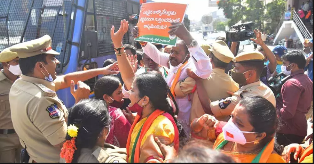 The women VRAs were arrested and detained in various police stations in midnight, he said.

In a media statement here, Sanjay said when the VRAs were on strike for the last 79 days, TRS government did not respond and showed its cruel mentality by detaining them in the police stations.

The BJP state president alleged that the TRS government was responsible for the death of more than 50 VRAs during the strike period.

When VRAs had given a call to siege the Assembly, Minister K T Rama Rao assured them that their problems will be sorted out within four days, but it is yet to be resolved, Sanjay said.

He said the Chief Minister or the Ministers should have come to Indira Park to talk to the VRAs instead of creating anarchy by making arrests and resorting to lathi charges.

To keep the promises given to the VRAs by the Chief Minister in the Assembly, the BJP state chief demanded the government to take necessary steps to resolve their problems in the state.