Naqvi said this at the "Minority Day" programme organized by the National Commission for Minorities here. 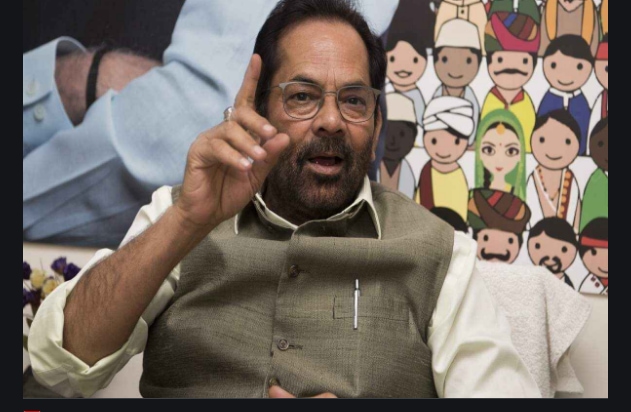 Naqvi said this at the “Minority Day” programme organized by the National Commission for Minorities here.

He said those who opposed to making triple talaq an offence or those who question the removal of Mehram for women going on Haj or those raising questions on the constitutional equality of marriageable age for women are the very people who are opposed to the basic spirit of the Constitution.

He said the “political gimmicks of minority appeasement” has been demolished by the Modi government by the “nationalist force of inclusive empowerment”.

The security, inclusive prosperity and respect for the minorities in India is the result of “Constitutional resolve” and “positive thinking” of the Indian society, he said.

Naqvi said India is a country where believers of all religions and sects and even those who do not believe in any religion have Constitutional and social security.

After independence, India adopted secularism while neighboring Pakistan embraced religious bigotry and today it is known as a factory for producing terrorists, he said.

Naqvi said the Modi government has provided an effective platform to indigenous artisans and craftsmen from every nook and corner of the country. Employment and self-employment opportunities have been provided to more than seven lakh artisans, craftsmen and people associated with them in the last six years.

He said that since 2014, the Modi government has provided scholarships to more than five crore students from six notified minority communities – Parsis, Jains, Buddhists, Sikhs, Christians and Muslims.

Of this more than 50 percent of the beneficiaries are girls. As a result, the school dropout rate among Muslim girls, which was 70 percent earlier, has now come down to less than 30 per cent.

He said the Modi government in the last seven years has provided employment and self-employment opportunities to more than 12 lakh people belonging to minority communities.