The Vijay Mashaal, which was lit by Prime Minister Narendra Modi from the eternal flame of the National War Memorial in New Delhi on December 16 last year, reached Tawang on Monday. 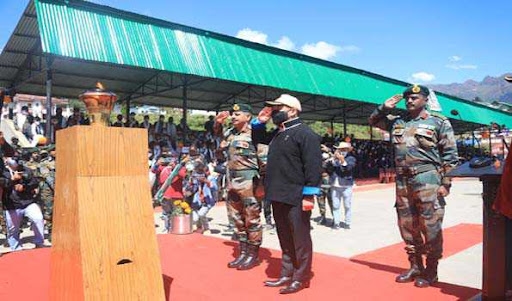 The Vijay Mashaal, which was lit by Prime Minister Narendra Modi from the eternal flame of the National War Memorial in New Delhi on December 16 last year, reached Tawang on Monday.

“The Victory Flame lit by PM Narendra Modi to celebrate ‘Swarnim Vijay Varsh’ has reignited the sense of unity across the country, besides recalling sacrifices of our brave soldiers in 1971 war with Pakistan,” Khandu said.

The Vijay Mashaal travelled through the treacherous terrain and narrow roads to reach Bumla, where it was received by the officers and jawans of the Indian Army deployed on the forward tier of defences along the LAC (Line of Actual Control) and was presented Guard of Honour at the Joginder War Memorial.

The Vijay Mashaal was thereafter taken to the historical Kinzemane area where His Holiness the Dalai Lama had first set his feet in India in March 1959. Travelling through Gorsam and Lumla, the Vijay Mashaal was extended a warm welcome by the local populace and was received with great enthusiasm and fervor, sources said.

The nation is commemorating the 50th year of the 1971 Indo-Pak War. The Vijay Mashaal was flagged off by the Prime Minister in December 2020 from the National War Memorial, New Delhi. Since then, the Flame has travelled all across the country to reach North-Eastern states and is currently touring the areas under the Indian Army’s Ball of Fire Division.

A number of events are lined up at Tawang to commemorate the Swarnim Vijay Varsh on September 21 & 22, defence sources informed.