Sector Officers and Sector Police Officers have been appointed and trained and are currently visiting the polling stations to identify vulnerable locations and voter segments. 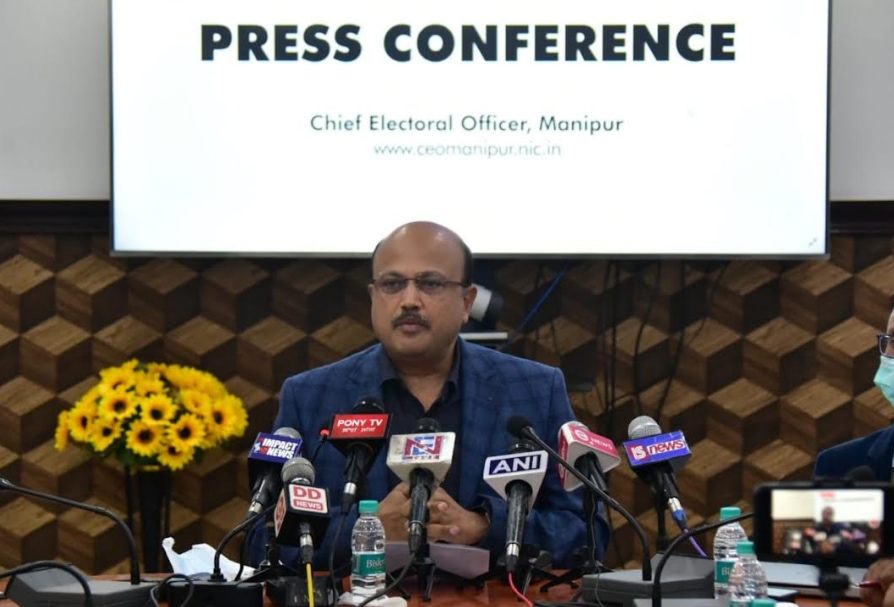 Imphal: Chief Electoral Officer, (CEO), Manipur, Rajesh Agrawal sought the support of the media fraternity to ensure a free and fair election in the forthcoming 12th General Election to Manipur Legislative Assembly, 2022. He also appealed to the media persons to verify any election-related information with the concerned officers and officials prior to dissemination in order to avoid any misinformation.

CEO, Manipur was addressing the media persons in a press conference held at the office of the Chief Electoral Officer, (CEO), Lamphelpat, Tuesday.

While briefing the media, Rajesh Agrawal highlighted various activities have taken up by the Office of the CEO, Manipur for smooth conduct of the forthcoming Election. He informed that the period for filing claims and objections for Special Summary Revision (SSR) of Photo Electoral Rolls with reference to January 1, 2022, has been completed. Over 1.4 lakh forms have been received during the SSR period and disposal of forms is going on and will be completed by December 20, 2021.

He said that the list of additions/deletions during Continuous updating has been made available on the CEO’s website. As per the schedule fixed by the Election Commission of India, Final Electoral Rolls will be published on January 5, 2022. Copies of Final Electoral Rolls will be made available free of cost to all recognized political parties. The electoral rolls will also be uploaded to the website of the Chief Electoral Officer, Manipur.

Three rounds of meetings have been held with recognized National/State Political Parties functioning in Manipur. The political parties have been extending full cooperation during the Revision period and in the run-up to the conduct of the ensuing General Election by giving valuable feedback and suggestions.

Sector Officers and Sector Police Officers have been appointed and trained and are currently visiting the polling stations to identify vulnerable locations and voter segments. Steps also have been taken to identify history sheeters, trouble mongers and persons causing vulnerability and are bound down under Cr.P.C. As a measure to curb pre-poll violence, 8648 licensed arms have been made deposited to the nearest police stations out of 25299 to date. Besides deploying Micro Observers, all Critical & Vulnerable polling stations will be brought under Webcasting/Videography. Additional CAPF will also be deployed in such polling stations.

The Election Commission of India has also come up with “Broad Guidelines for Conduct of General Election/Bye-Election during COVID-19” and CEO, Manipur and all District Functionaries are committed to following in letter and spirit and issuing necessary instructions to candidates, political parties and voters at large. A state-specific plan with respect to COVID Management is also being prepared.  It was also decided to operationalize Cashless treatment of persons on election duty, Rapid Response Team, Air Ambulance and 24/7 Control Rooms.