Sonia Gandhi says she is full time president of Congress, to continue on the post

While most members of CWC urged Rahul Gandhi to take charge, Sonia Gandhi will continue to hold the top post in the party for another year at least, before Congress gets a new president. 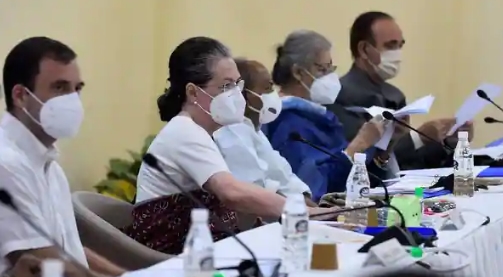 New Delhi: Amid questions being raised on leadership in the Congress, Sonia Gandhi on Saturday said she is a “full time” and “hands-on” president of the party, reprimanding critics within the party for speaking out on public platforms.

While most members of CWC urged Rahul Gandhi to take charge, Sonia Gandhi will continue to hold the top post in the party for another year at least, before Congress gets a new president.

At the Congress Working Committee meet today, Rahul Gandhi, who has been leading charge of the party in Parliament and outside against the ruling Bharatiya Janata Party (BJP), was asked by leaders to take the full time charge of the party. The Gandhi scion thanked the leaders, and said he would consider the demand.

Amid questions over her continuation on the post and demand for a “full time president” being made by several senior party leaders, Sonia Gandhi called for discipline in the party, and said in order to perform well in the upcoming assembly polls, members needed to keep party interest paramount.

While the party remained non-committal on who would take the charge of the party next, the dates for organisational elections were announced, and the process of electing next Congress president would take place between August 21 to September 20, 2022.

General Secretary KC Venugopal also said there was no doubt that Rahul Gandhi was the most popular leader of the party.

The decisions made by Congress on Saturday indicate towards an overhaul in the party, including a massive membership drive, training programs for party workers, and organisational elections, which would take place over the next year.

Party leader Randeep Surjewala said it would be the “largest enrollment drive ever”.

Party sources said at least 40 leaders spoke at the CWC meet, and most of them urged Rahul Gandhi to take charge of the party. The CWC passed a political resolution that focused on the ongoing stand-off between India and China in Ladakh, and rising incidents of terror in Jammu and Kashmir after Taliban takeover of Afghanistan.

It also talked about the Mundra drug haul, economic situation, and the recent decision of changing the jurisdiction of Border Security Force (BSF), monetisation plan of the union government and “assault on democratic institutions”.

Two more resolutions were passed on inflation and on acute agrarian distress and attacks on India’s farmers.

Earlier, in her opening address to the CWC, in an apparent response Sonia Gandhi openly responded to demands by senior party leaders of the ‘G-23’ pushing for organisational overhaul and said, “The entire organization wants a revival of the Congress. But this requires unity and keeping the party’s interests paramount. Above all, it requires self-control and discipline.”

“I have always appreciated frankness. There is no need to speak to me through the media. So let us all have a free and honest discussion. But what should get communicated outside the four walls of this room is the collective decision of the CWC,” Sonia Gandhi announced in her opening address.

Senior party leader Ambika Soni however said after the meeting there was no mention of the ‘G-23’ in the meeting. A party source said they had reached out to senior leaders, and there is no rift in the party.

The CWC also called upon like minded parties to join them in the fight against the Narendra Modi government. A party source said Congress would have an “open mind” towards joining hands with parties which want to join the battle against BJP.

The CWC meet held on Saturday was the first physical meet of the party leaders in 18 months.

Gangtok: Sikkim Governor Ganga Prasad has congratulated Vice President-elect Jagdeep Dhankhar. He has complemented Dhankhar for his elevation to the...
Nagaland