She also demanded that a meeting of the the standing committees must be convened to ensure collective action and accountability to combat the pandemic better. 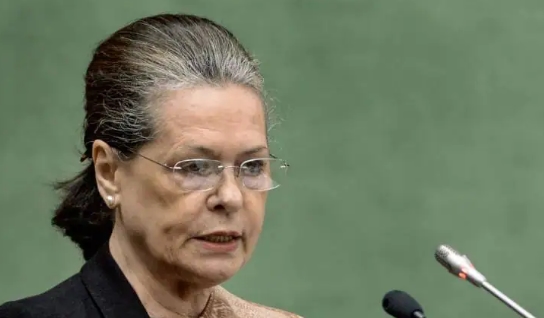 New Delhi: Congress president Sonia Gandhi Friday accused the Modi government of having failed the people of the country in handling the pandemic and demanded that an all-party meeting be convened immediately on the COVID-19 situation.

The battle against the pandemic transcends political differences and everyone has to fight it together as a nation, she said at a virtual meeting of the Congress Parliamentary Party, the PTI reported.

She also demanded that a meeting of the the standing committees must be convened to ensure collective action and accountability to combat the pandemic better.

Launching a fierce attack on Prime Minister Narendra Modi, Gandhi charged that India is crippled by political leadership that has no empathy for the people and has failed the people of the country.

“Let us be absolutely clear — the system hasn’t failed. The Modi government has been unable to constructively channelise India’s many strengths and resources. I say this categorically – India is crippled by a political leadership today that has no empathy for the people. The Modi Government has failed the people of our country,” she told the MPs.

She said the Congress firmly believes that fighting the pandemic is not a ‘Government versus Us’ battle but a ‘Us versus Corona’ battle.

“This battle transcends political differences. We have to fight this battle together as a nation. In that spirit, as a first step, I believe that the Modi government must urgently call an all-party meeting on the COVID-19 situation,” she said.

“The Congress Party also demands that standing committees must be convened to ensure collective action and accountability to combat the pandemic better,” she said.

Gandhi told the Leader of Opposition in Rajya Sabha Mallikarjun Kharge to bring to the notice of the Presiding Officer the Report of Standing Committee on Health presented in October 2020 and demand that he take action on the recommendations of the report.

“The situation brooks no delay. Tackling this crisis requires able, calm and visionary leadership,” she said.

The nation, she charged, is sinking under the weight of the Modi government’s indifference and incompetence and told party MPs that this is the time to rededicate themselves in the service of our people.

The Congress chief said the meeting of the Congress Parliamentary Committee was being held in extraordinary circumstances, with India being in the grip of a deadly health disaster.

She said thousands have died and millions are scrambling to access basic healthcare, life-saving medicines, oxygen, and vaccines.

It is heartbreaking to see people battling for their lives in hospitals, on roads, waiting in vehicles, far too many for want of any medical help at all, she said.

“And what is the Modi government doing? Instead of alleviating their suffering and pain, it has abdicated its fundamental responsibilities and duties towards the people,” she lamented.

She also alleged that the government’s vaccination policy is inequitable and will exclude millions of Dalits, Adivasis, Other Backwards Classes, as well as the poor and the marginalised.

“It is utterly shocking to see the Modi government abdicate its moral obligation and its sworn duty towards the people,” she said.