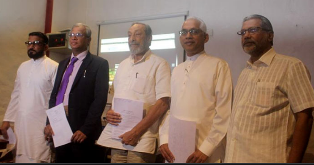 Colombo: Sri Lankan opposition MP Eran Wickramaratne has urged the President, the Prime Minister, and all former leaders present in Parliament to declare their assets and set an example for all others to follow.

This followed a pledge by President Ranil Wickremesinghe to eradicate bribery and corruption and to formulate new laws to combat corruption.

MP Wickramaratne called on the President to implement these proposals urgently.

“Example is even more important than the law itself. So, whilst the law is being changed, I call upon the leaders and cabinet ministers to voluntarily make their declarations public. That will be more powerful than the change in the law itself,” he was quoted as saying.

The draft bill presented by the MP seeks to remove the “archaic secrecy provisions within the act” and keep it in line with obligations of disclosure under the Right to Information act and principles of maximum disclosure.

The draft complies with international norms on asset declaration and transparency, the report said.

It also mandates the President too to make public his income and assets, which is currently not a requirement. The bill calls on all senior officials and parliamentarians to declare their assets immediately, and for election candidates to hand over a declaration along with nominations.

“There should be better accountability. The situation with regard to corruption today is not what it was in 1975, it is vastly different. These proposals will protect the public and even officials. Many politicians have built a huge asset after entering politics, and the amendments to the act mean that officials cannot secretly amass large amounts of wealth after coming into public office,” the SJB MP said.

Wickramaratne noted that widespread corruption in Sri Lanka was a moot point during discussions with the IMF, and economic crimes were also listed for the first time at the UNHCR sessions in Geneva.