Six oxygen plants to be installed by next week in Meghalaya

Three of the oxygen plants – at Shillong Civil Hospital, Ganesh Das Hospital and RP Chest TB Hospital – have been sanctioned from the PM Cares. 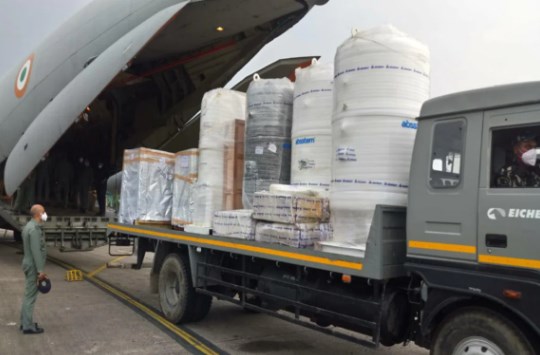 Shillong: Six oxygen generation plants are expected to be installed by next week to deal with the surging second wave of the COVID-19 across Meghalaya, the Director of Health Services (MI), Dr. Aman War informed on Friday.

“There are six number of oxygen plants where installation is going on. We hope that all these plants will be up and running by early part of next week,” he told reporters here.

Three of the oxygen plants – at Shillong Civil Hospital, Ganesh Das Hospital and RP Chest TB Hospital – have been sanctioned from the PM Cares.

Dr War informed that the 600 litres per minute (LPM) oxygen plant for Shillong Civil Hospital is being airlifted from Delhi and will be reaching the state capital on May 25.

Currently, to meet the oxygen requirement in Shillong Civil Hospital, the government has installed six generators of 45 LPM each, which have been running since last Monday, he informed.

“The six generators are catering to 25 COVID beds in the COVID wing of the Shillong Civil Hospital and that too on high flow which means a very high consumption of oxygen,” Dr. War said.

Connection of oxygen pipeline has already been completed at the Shillong Civil Hospital, Dr. War said adding, “Now what is needed is just to connect the pipe from the generation plant to the manifold room and from there oxygen can be distributed accordingly to all the wards”.

The senior medical official also informed that another oxygen plant for the RP Chest TB Hospital is on the way from Guwahati airport which had been airlifted from Delhi on Thursday and would be installed on Saturday.

“Piping has already been done and we expect by early part of next week these machines will be up and running,” he said, while adding that the plant at Ganesh Das Hospital will also be functional from Saturday.

The three other oxygen plants for Jowai in West Jaintia Hills district, Tura in West Garo Hills district and Nongpoh in Ri-Bhoi district have been sanctioned by the UNDP, Dr War said, adding that the machines for Nongpoh and Jowai have reached and are under the state of installation while for Tura, the machine is also on its way.

“All these piping and everything are going on in full swing, they are working 24×7,” he said.

The senior medical officer also informed that the government has come up with two cryogenic oxygen plants to be set up at Umsawli, Shillong and Jengjal, Tura.

“Work is going on in full swing for the 13 KL plant at Umsawli and we expect that this plant will be up and running by June 15 latest. The plant will be able to deliver 1,000 cylinder refilling capacity in a day,” Dr. War said.

“In Jengjal, Tura another 20 KL plant is coming up and we expect it will be ready within 2 weeks time. Side preparation has already been done. Now we only have to do the civil works which are going on in full swing and it may come up earlier than the one in Shillong and this will cater to 2,000 cylinders per day,” he added.

The government feels that these plants would be sufficient to ensure continuous supply of oxygen to Khasi-Jaintia and Garo Hills regions of the state. Meanwhile, Dr. War also informed that small 45 LPM plants will also be set up at the Community Health Centres if the necessity arises.

“We have seen the 45 LPM plant and within one hour we can set them up provided that we get the machines. If it is necessary that these other plants will also be set up,” he said.