Situation in border tense after death of two persons at Myanmar

Manipur government has advised all not to enter Myanmar until the situation improves. 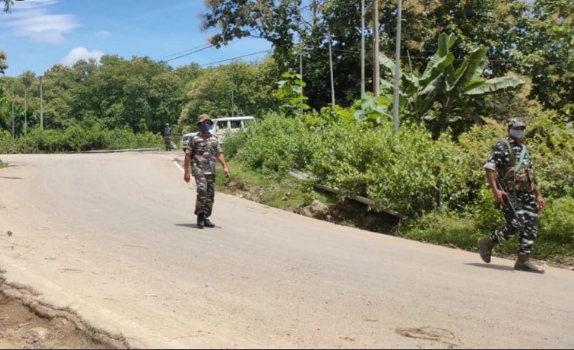 Imphal: Moreh the border town on the Indian side continued to be tense due to the killing of two youths from the area at Tamu, Myanmar on June 5 last.

The district administration has imposed prohibitory orders to avoid any untoward incident.

Residents of Moreh have been demanding handing over the dead bodies by Myanmar authorities and some of them even went to Myanmar and threw stones and burnt a Myanmar military outpost on Wednesday.

Manipur government officials and police have asked Indian citizens not to cross over to Myanmar. The Manipur and Myanmar border areas are porous and people freely enter each side during the daytime for trade and other activities.

There are Manipuri, Tamil, Kuki, and other communities on both sides of the border who visit each other by taking a permit in the border.
Civil societies of Moreh have also asked the Manipur government to take up the matter with Myanmar authority.

Manipur government has advised all not to enter Myanmar until the situation improves.

Moreh Auto-Owners & Drivers’ Welfare Association (AMAO&DWA) President Yamthong Haokip alleged that two Tamils who were killed at Tamu were tortured before they were killed.

Both of them were drivers and had gone to attend a birthday party it was stated. Myanmar authority has not so far returned the bodies of L. Mohon and M Iyanar.

istrict officials said the situation was under control and attempts were going on to approach Myanmar authorities to resolve the crisis.