Sitharaman, Rijiju arrive in Imphal, to meet all BJP legislators

It was being speculated that rivalry between Biren and Biswajit was delaying the formation of the government.  However, the party has denied it. 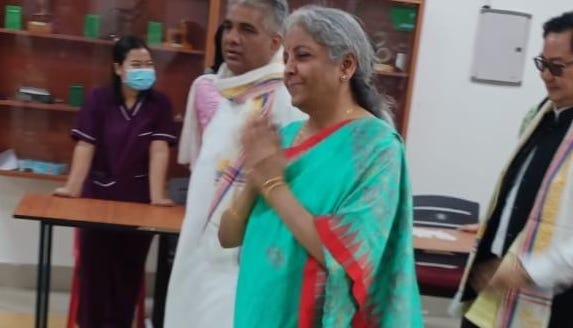 The BJP Parliamentary Board on March 14 appointed Union Finance Minister Sitharaman as Central observer and Union Law and Justice Minister Kiren Rijiju as co-observer for the election of the BJP Legislature Party leader in Manipur.

Before leaving Delhi for Imphal, Sitharaman took to Twitter and announced the visit to Manipur on Sunday.

On Saturday, N Biren Singh and Th Biswajit were called for an emergency meeting with Central leadership in New Delhi. Both the state leaders also met Union Home Minister Amit Shah at his residence till 11 pm.

After meeting with the State legislators both the Central observers will depart in the same special flight by 6 pm, sources added.

BJP, in spite of winning 32 seats, have not been able to form a government in the state yet. The tenure of the current Manipur Legislative Assembly has already ended on March 19, 2022.

Biren has been appointed as caretaker Chief Minister of the state. It was being speculated that rivalry between Biren and Biswajit was delaying the formation of the government.  However, the party has denied it.