During the interaction, the Union Finance Minister listened to the inspiring stories of women entrepreneurs in J&K and how they rose above the challenges to benefit their society at the grassroots level. 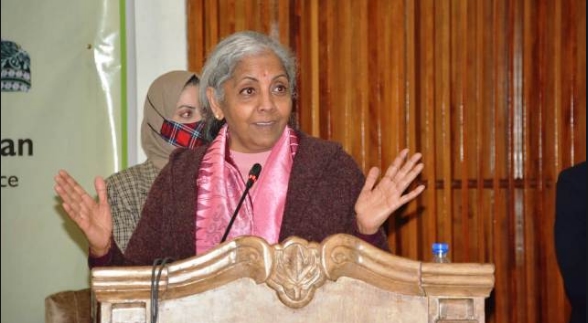 The Union Minister who is on a two-day visit to Jammu and Kashmir had an interaction programme with 60 women entrepreneurs from J&K working in a variety of sectors, including beekeeping, dairy, handicraft, journalism, copper works, and furniture manufacturing, among others.

The event featured success stories of women entrepreneurs from across the UT who have been benefitted under different schemes initiated by the J&K government.

The Union Finance Minister lauded the efforts of the UT administration for creating a culture that promotes women entrepreneurship in the UT of J&K which is unique in the country.

She said it is encouraging to see that the women entrepreneurs here are in such fields which were not taken by many and were usually male-dominated.

During the interaction, the Union Finance Minister listened to the inspiring stories of women entrepreneurs in J&K and how they rose above the challenges to benefit their society at the grassroots level.

“The land of Kashmir is the land of “Maa Sharada” and that absolute power-packed knowledge-driven energy is what has come out here. I appeal to you to move around the country and share your stories”, she remarked.

She also encouraged the women entrepreneurs and the Mission Director, RLM to prepare a detailed plan, after threadbare consultations, on how they could be facilitated in a much better way. She said the action plan can further be incorporated in the next budget.

On the occasion, Lieutenant Governor, Manoj Sinha highlighted the key initiatives initiated by the UT administration for supporting women entrepreneurs under different schemes, commensurate with their educational background and experience.

The Lt Governor observed that the culture and tradition of our country consider women to be a form of power and in J&K, we have ensured that women rise as a beacon of enlightenment and become vital drivers in the developmental journey of Jammu & Kashmir.

“It has always been my firm belief that the contribution of women in economic activities is by no means less and there will be many examples where their contribution is much more than that of men. Therefore, last year itself, the UT administration had taken a decision to move ahead from the talk about empowering women and to implement programmes on the ground, in a concrete way to establish their right