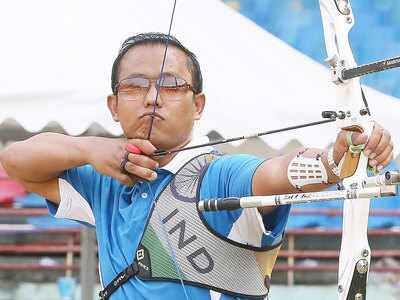 A campaign launched by the Department of Sports & Youth Affairs from 23rd June to 23rd July is on with Selfies, Dialogues, Quiz, Debates and Talkshow also attached importance by Minister KN Lepcha and Secretary.

The Minister highlighted the steps taken by the State Govt, including increasing the amount of money given to winners, increasing reservation from 2 pc in employment to 5pc for Sportsmen and provision for employment.

He said the increase has been decided by the Chief Minister. ‘The Sports talents abound in Sikkim. The talent search is being done from Block level to the highest administrative level. We hope to see many Tarundeeps in future,’ said Minister Lepcha.

Archer Tarundeep Rai (37), will be participating in a men’s team event with Atanu Das and Prason Jadhav. Their Coach Man Bahadur Gurung has accompanied 4 of them. While Deepika Kumar will be participating in women’s singles, recurve. Tarundeep can be seen on Sony Sports, under Indias’ Archery at 5.30 am IST on 23rd July and Deepika from 9.30 to 11-30. Individual ranking rounds for men will be held also. India has never won an Archery medal in Olympics so far, but this time it is anticipated.