Murmu also mentioned the state's achievements in the power sector, literature, and sports. 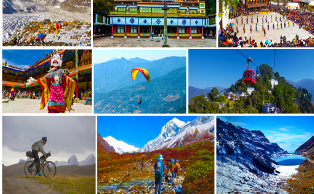 Gangtok: India’s first-ever woman tribal president Droupadi Murmu on Friday appreciated the unity in diversity reflected in the cultural traditions of Sikkim and expressed happiness over the higher enrolment of girls compared to boys in the state’s higher education.

Murmu, who arrived here during the day on a two-day visit to the Himalayan state on the last lap of her trip to the country’s North-East, was speaking at a civic reception organized in her honor by the state government.

“Sikkim has a rich cultural heritage, which reflects the cultures of different communities. Sikkim has been one of the leading states in the country, with an eighty percent literacy rate.It stands as the first state in the country in terms of the percentage of enrolment in higher education.

“It is a matter of pleasure to know that the enrolment of girls is more than that of the boys,” Murmu said in her speech at the Manan Kendra.

Murmu lauded Sikkim for its scenic beauty, flora, fauna, lakes, mountains and the two main rivers Teesta and Rangit. She also praised the state for its negligible plastic waste, cleanliness and for being the first fully organic state.

Murmu also mentioned the state’s achievements in the power sector, literature, and sports.

She thanked the government, officers and the public for the wonderful achievements.”I am confident that the projects inaugurated and foundation stones laid for infrastructure would go a long way in improving the economy of the state, generating employment and general progress”

Earlier, Murmu was felicitated by the state Governor Ganga Prasad and Chief Minister PS Tamang, who presented her a set of Sikkimese costume

The President is scheduled to leave for Namchi, South Sikkim in an Army helicopter on Saturday morning on her way back to Delhi.